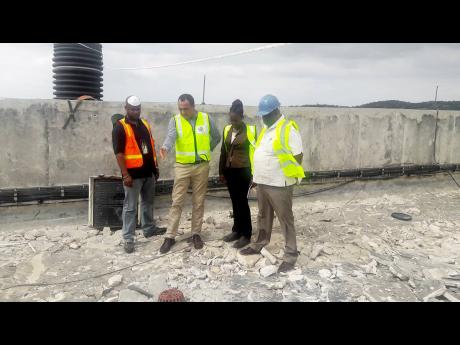 Health Minister Dr Christopher Tufton has said that restoration work on the Cornwall Regional Hospital (CRH) building in Montego Bay, St James, was progressing well and that the J$3.5 billion work to fully restore the facility was on track.

Tufton’s comments came on Thursday during a tour to inspect the ongoing work at the Mt Salem-based Type A facility. He was accompanied on the tour by Errol Greene, director of the Western Regional Health Authority (WRHA), and other technical support staff.

“I am here on my regular tour of the CRH, and looking at the rehabilitation programme. I think we are working according to schedule, based on what the folks on the ground have told me,” Tufton told journalists following the tour.

Last month, an independent oversight committee for the CRH’s rehabilitation estimated that the hospital should be fully operational by November this year.

The scope of work to be done includes the replacement of plumbing and electrical fittings and a complete rehabilitation of the 10-storey building’s roof, along with replacement of the ventilation system.

“We looked at the roof where the contractor has commenced work to literally repair the roof. The roof was one of the areas of concern as it was leaking, creating the moisture in the walls, and creating the environment for mould growth, and so that is going to be a major comprehensive overhaul,” Tufton explained.

“We are doing it right this time, and we’re not patching up the place. We are doing a major overhaul so that when we have completed it, we will have a hospital in western Jamaica that will give top-notch services both from the personnel who are here and in terms of the building, and the equipment to give support.”

In 2016, a malfunctioning ventilation system at the CRH forced the relocation of several services and departments out of the building to the neighbouring West Jamaica Conference of Seventh-day Adventists and the Falmouth Public Hospital in Trelawny.