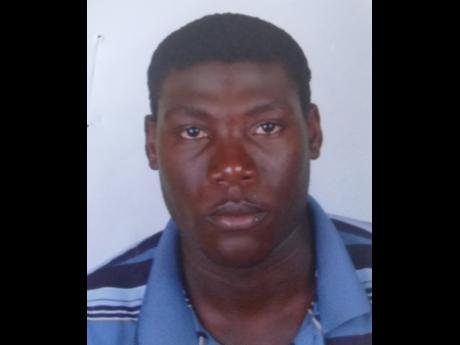 Contributed
Twenty-two-year-old Odean Stephenson who was killed along with his stepfather and his common-law wife in Bellefield, Manchester.

Workers at the Better Taste Bakery in Williamsfield, Manchester, yesterday struggled to carry out routine tasks as a main ingredient was missing.

The staff found the going rough as they tried desperately to come to terms with the brutal killing of 22-year-old Odean Stephenson, whose gimmicks they would depend on to lighten the mood as they worked.

A victim of a triple murder that has sent fear into the hearts of residents in Top Bellefield in the parish, Stephenson was found with gunshot wounds on the floor of his home yesterday morning.

On the bed in the same room were the bodies of his stepfather, 55-year-old Uriah ‘Ballie’ Morgan, and Morgan’s common-law wife, Mabel Green.

Superintendent of Police David Whyte said the bodies, which all had gunshot wounds, were found approximately 7:30 by a family friend. He said no motive has yet been determined for the killings.

“I have never met somebody so mannerly and so hard-working,” Carlene Ellis, owner of Better Taste Bakery, told The Gleaner yesterday.

“He was extremely jovial and he was the comedian around here ... . There were times when he would perform the commercials, and I’m sure if the people saw him, they would give him a job,” Ellis said. “That’s how he got the nickname ‘Skinny’, because he was always laughing, skinning teeth.”

She said Stephenson’s aunt was employed to the bakery for years and introduced him to her for possible employment.

After starting out as a part-time employee for a few days per week on his own merit, he was hired full time.

“He was so quiet. He was the ‘Yes, Ma’am man’. I had to tell him that it was OK to say no ... . He was an all-rounder here. He did packaging, milling – everything. Anything you asked him to do, he would do it,” Ellis added.

She said while she always pushes her employees to improve their education, Stephenson was bent on just working hard to make money to help his stepfather.

“He told me he attended Bellefield Primary and Beaumont Comprehensive High, but he always said his brain couldn’t manage education. Each time I pressed him, he would say he couldn’t manage. But he was very good with his hands.”

A grief-stricken Ellis revealed that Stephenson only referred to Morgan as his father and would seek an advance when times were hard to ensure they had groceries in the house for that week.

“He lived for his stepfather. He had a lot of love for him, and when he wasn’t at the bakery, he was at home helping out with building because, apparently, they we’re adding rooms to the house ... . To what I have heard, he raised him from a tender age. He was married to his mother and he (Stephenson) took a liking to him.”

Morgan’s eldest brother Jeffrey Pommels was also at a loss.

“This morning, me wake up fi go me bush because all of us was supposed to go and me hear me neighbour bawl out and say a three a them dead ova deh. When me run ova deh now, me get fi understand say a Ballie, him wife and the little boy.

“Boy, I don’t know what could cause this … . This shocking, man. I don’t know how this could happen,” he said.

A resident from the community said she has never seen a more humble father-son duo, as she also struggled to make sense of the tragedy.

“Mr Morgan never went anywhere and do anything to anybody. He literally went from his field, where he worked daily as a farmer, to his house or maybe his house to the gate and church occasionally. Very quiet man. I don’t know how the community will recover from this.”

She added: “We don’t really know the common-law wife because she just came here a few months ago, but our hearts are heavy. We really have never seen anything like this before ... . You [usually] hear it on the news, but now it has hit home.”