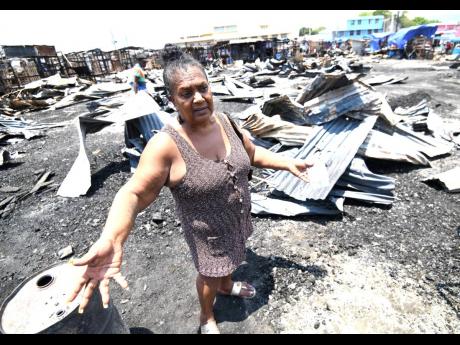 Ricardo Makyn/Chief Photo Editor
Fifty-seven-year-old Debbie Maragh stands at the spot where one of her clothing stalls was located after a fire gutted the Ray Ray Market in downtown Kingston on Tuesday morning. This is the seventh fire that Maragh has now seen in the almost 15 years as a vendor in the market.

The scorched ground, charred wood and sheets of zinc scattered about are all that remain of the Ray Ray Ground Market in downtown Kingston, which was devastated by an inferno in the wee hours of Tuesday morning, a mere eight months after it was ravaged by another blaze.

The police report that at about 3 a.m., the Darling Street police and firefighters responded to a call that the market was on fire.

The massive blaze, which spared nothing in its path, left vendors like Debbie Maragh, who has been selling in the market for 15 years, pondering their next move.

Maragh, who indicated that she has been a victim of seven previous fires at the market, said her stalls and barrels of stock all went up in flames.

Standing amid the rubble hours after the fire was extinguished, Maragh said that she has remained at the market despite several tragedies as she doesn’t see another option.

“I don’t have anywhere, no alternative to go to sell the kind of clothes dem weh me sell in here,” she told The Gleaner.

“It’s a big market ... . You build up yuh stall like with zinc because when the rain fall, we can’t take up everything, so we have to put on zinc and then we run the light in there, then we have to put the pallet them on the ground, you know, and we have to paint it,” a dejected-looking Maragh said of the operations.

On the last occasion, Maragh’s children helped to get her back on her feet, but this time around, she is not sure if they will be able to assist.

“Mi no have no husband. Mi have me children dem that help me and dem tell me not this time again. Each time dem want me to stop, and true mi have the clothes dem and so, mi no know wah else fi do. Mi have light bill fi pay, mi have water rate, grandchildren to send go school. Mi have daughter fi look after, you know. Mi no know wah else fi do,” Maragh lamented.

She added: “Well, I don’t know if they might change dem mind or what. Right now, I just sit down and I’m wondering.”

The Gleaner tried unsuccessfully to speak with Kingston Mayor Delroy Williams and Town Clerk Robert Hill to ascertain what, if any, assistance the Kingston and St Andrew Municipal Corporation would offer to vendors.