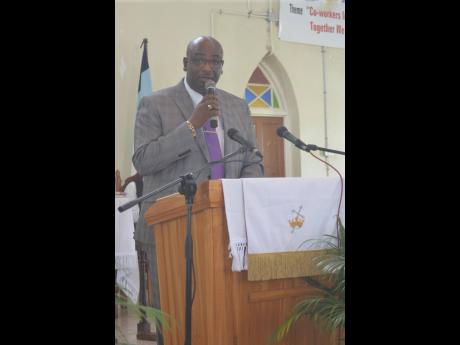 The Jamaica Teachers’ Association (JTA) has strongly condemned the vicious murders of students Shantae Skyers and Tricia Morris and lecturer Samuel Martin, which took place within a three-week period, and is calling on Jamaicans to play a greater role in stemming crime and violence across the country.

JTA President Dr Garth Anderson made the call yesterday while addressing the JTA’s service to kick off Education Week at the Mount Ward Methodist Church in Hanover. Education Week 2019 is being held under the theme ‘Empowering Educators: Retooling, Innovating, Networking for Sustainable Development’.

“As we lament these acts of violence as a profession and as a nation, we must take a stance against those who seek to do harm to us and our loved ones. We must make our voices be heard louder and become active participants in the process of finding justice,” said Anderson.

Eight-year-old Skyers was found murdered in bushes in Sterling Castle Heights, St Andrew, on April 16. Her body was found following a five-day search, after she disappeared the previous Thursday while returning home from school.

Last Tuesday, the body of 11-year-old Morris, who hailed from Woodland, Hanover, was found with multiple injuries and signs of sexual trauma. She had last been seen alive the previous Saturday night after leaving home for church.

In-between those discoveries, the education sector was rocked by the murder of 41-year-old Martin, whose decomposing body was found in May Pen, Clarendon, on April 25. The English language lecturer was last seen alive on Good Friday.

He also used the occasion to urge Prime Minister Andrew Holness to appoint a full-time minister of education, youth and information.

Former minister Ruel Reid was fired from the post in March 20 amid allegations of corruption in the ministry.

“In recent weeks, we have seen the education sector being plunged into uncertain waters with the removal of the once vivacious and articulate minister. Students, teachers – and indeed the entire society – have been left to speculate why the minister was removed from one of the most complex sectors in the country,” said Stewart.

“Despite the fact that the permanent secretary has said that we now have three ministers of education, we would want to have one dedicated minister to oversee the Ministry of Education at this time, as we face the many challenges that the country and the sector are facing,” Stewart added.

He was referencing statements made moments earlier by Permanent Secretary Dr Grace McLean, who pointed to the ministry’s current management by Holness, State Minister Alando Terrelonge, and Karl Samuda, minister without portfolio in the Ministry of Economic Growth and Job Creation.