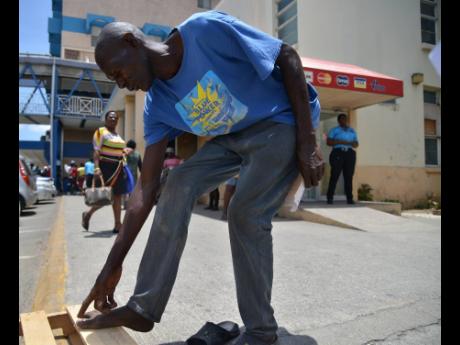 Kenyon Hemans/Photographer
Gary Ashley, seen here outside Kingston Public Hospital yesterday, shows the Gleaner team his infected toe, for which he said he is scheduled to undergo an X-ray in one month.

The Government plans to roll out a multimillion-dollar spend to clear the backlog of public-sector patients languishing from the wait for diagnostic tests and non-emergency surgeries by outsourcing healthcare to private practitioners, free of charge to the public.

Lengthy wait times for surgery have been the bane of Jamaica’s public health system, with patients sometimes waiting months – or even years – for operations that rank low in priority compared to crisis cases involving injuries caused by gun violence, heart attacks, and other life-threatening illnesses.

Public hospitals are often under-resourced, and even when they are outfitted with equipment, inadequate maintenance schedules and financing cause them to fall into disrepair, exacerbating delays and causing mass cancellations.

The proposed outsourcing of diagnostic testing and surgery, which The Gleaner understands has been approved by the Cabinet, will be underwritten by the Government, thus facilitating a faster throughput of patients to the operation room. Testing will include rudimentary procedures such as X-rays, colonoscopies and MRI scans, the latter costing tens of thousands of dollars, putting key pre-surgery assessment out of the reach of low-income Jamaicans.

The Holness administration is banking on negotiating favourable terms so that private diagnostic units, medical centres and hospitals would offer procedures at below-market rates as a trade-off for heavier traffic through their doors as a quid pro quo to reduce wait times.

It is set to take effect in September.

Among the surgical options that may be included in the divestment of services are the removal of hernias, uterine fibroids, and gallstones, conditions which, though rarely lethal, cause grave pain and hamper productivity.

Details are expected to be revealed about whether the outsourcing of services will go to public tender.

The initiative could prove welcome relief for suffering patients like the disgruntled Gary Ashley, a fisherman who lamented having to wait for intervention three weeks after sustaining an injury and subsequent infection to his toe.

Speaking at Kingston Public Hospital yesterday, he said he has had to wait too long for an X-ray to be done and fears losing his leg.

“Dem gimme antibiotics, but it nah work. Di doctor seh infection inna di toe and it need to come out,” said Ashley. “I come back today and dem a tell me to come back next month, because them nuh have nuh X-ray machine. Next month can’t work. A big hospital, you know.

“If me wait till next month, maybe me a go hear seh di foot affi go cut off,” he said, indicating that he would support the Government’s plan to ease patient waits.

But even if Government makes outsourcing offers to private medics, Dr Garth Rattray, a general practitioner, told The Gleaner that he and his colleagues may only jump at the opportunity if attractive incentives are brought to the table.

He had reservations about the initiative because of the Government’s culture and reputation as a bad payer of bills.

“If they want to outsource certain things, they have to make it enticing. Medicine is an art, but it is also a business. We know already that governments don’t do well paying bills, and that’s why they have difficulty with gloves, needles and everything for public facilities. I know people who work for Government in many different spheres, who are outsourced, and can’t get their money.

“What they really should do is give some of us tax breaks or concession on a car or pay the doctors on time. Otherwise, it is not going to work. When they introduced the no-user-fee thing, nobody took it up, for example, because of issues with remuneration and how much crowd will be in your office,” Rattray said.