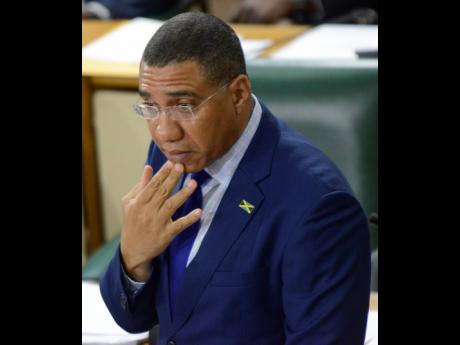 Prime Minister Andrew Holness last month submitted additional documents to the Integrity Commission based on queries the body made over his 2017 statutory declarations.

Holness and several other serving and former parliamentarians, including Zavia Mayne, Luther Buchanan, Leslie Campbell, Ian Hayles, Ruel Reid, Arnaldo Brown, and Keith Walford, were flagged after their income, assets, and liabilities declarations were not cleared as cited in the 2017 annual report of the Integrity Commission, which was tabled in the House of Representatives on April 30.

Information from sources close to the prime minister with knowledge of the happenings reveal that in an April 23 letter from Director of Investigations David Grey, the Integrity Commission informed Holness that it was in receipt of his April 16 letter and additional documents.

There has been no indication on whether the Integrity Commission has requested further information since or whether it was satisfied with Holness’ response.

Speaking at a press conference last week, one month after Holness’ submission, Auditor General Pamela Monroe Ellis said there was no change in the status of the prime minister and other parliamentarians, who had not been given the all-clear in the 2017 report.

Several attempts by The Gleaner to get a response from the Office of the Prime Minister on the matter have failed.

A number of civic and business leaders have been calling on Holness to publicly address the issue since the report was tabled three weeks ago. He, however, has remained silent.