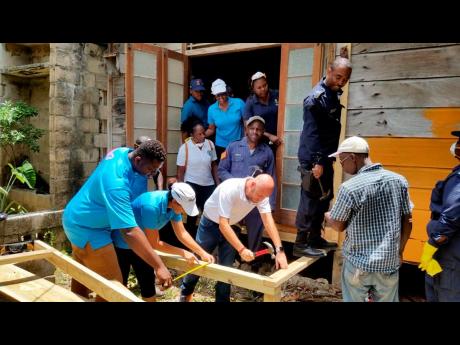 While thousands of people in western Jamaica treated yesterday’s Labour Day as just another public holiday, others put heart and muscle into transforming communities and improving lives.

In Trelawny, numerous projects were undertaken, but the one that was most impactful was the work done to restore the home of 100-year-old Boris Anderson of Martha Brae. The staff of Royalton White Sands, the Trelawny police, and the Rotoract Club of Falmouth combined resources and carried out J$700,000 worth of refurbishing, painting, and pest-control treatment of Anderson’s house, which left him elated.

“Going forward, Mr Anderson will be our project. We will be taking care of his meals and his medications,” said Debbie Bailey, a senior staffer at Royalton.

In St James, work on two pedestrian crossings and traffic light signals at the intersection of Sea Castle and Barrett Town was undertaken alongside the construction of sidewalks and the erection of street signs.

“The good news is that everything that has been started here will be finished by the end of the day,” said Tourism Minister Edmund Bartlett, who spearheaded the day’s activities. “This is perhaps the biggest and most fulfilling Labour Day project that has ever been embarked on in East Central St James.”

In Cornwall Courts, Sylvan Reid, the councillor for the Salt Spring division, led a team that gave the community’s children’s park a facelift. The park’s perimeter fencing was repaired, overgrowth cleared, and various rides and slides painted.

,“This park is much used, so we have to make sure it is always in good shape for the children,” said Reid. “I am sure the children will be very happy when they come out to play this weekend.”

Over in Granville, community groups came on board to tackle projects such as a clean-up of the compound at the Granville All-Age School, including refurbishing work. The fading pedestrian crossing near the entrance to the school was also repainted. The team also gave the Cartagena Basic School a paint job, and with the help of members of the Jamaica Defence Force, paved the courtyard of the Granville Health Centre.

In St Elizabeth, much was done in and around the Holland Primary School by a team led by Member of Parliament J.C. Hutchinson. Renovation included the painting of a section of the school, repair of the driveway, cleaning up the compound, and work on a bridge that was donated by Appleton Estate to alleviate occasional flood conditions.

‘Extensive work was done on the driveway, to make it safer for children to move about on a daily basis. We also repainted the playground equipment that the children use on a daily basis,” said Simone Doctor, the school’s principal.

In Westmoreland, where the Llandilo School of Special Education was the main parish project, community groups and the Jamaica Defence Force (JDF) jointly provided a facelift, pruning trees and painting the pedestrian crossing.

“We are very appreciative of the effort today,” said Roy Reid, the school’s principal. “We had the JDF, the HEART Trust and National Youth Service, and the Westmoreland Municipal Corporation doing things like repainting of the pedestrian crossing at the school gate and painting the interior of the school.”

Hanover also featured several projects, including the refurbishing of the Sandy Bay Community Centre and the construction of a house for police Constable Derron Scott and his family, who recently lost their home to a fire.