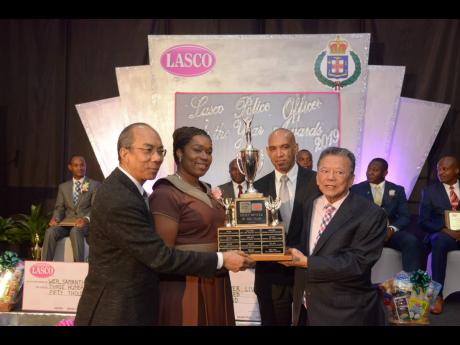 Samantha Brown-Thompson is a woman on a mission.

The 34-year-old woman corporal in the Jamaica Constabulary Force (JCF) has been on a campaign in communities surrounding the Guys Hill Police Station in St Catherine, where she serves as a subofficer, to make parents and youth – especially adolescents – aware of the dangers of smoking marijuana.

“The JCF has served as an avenue for me to journey with my community. Psychology is my passion, and that enhances my journey with the people, especially adolescents. Adolescents are not equipped with coping mechanisms, and so smoking ganja is as a result of peer pressure, neglect from parents, and inadequate supervision. It has affected them in school, and some of them have got into problems with the law,” the Clarendon native reflected as she shared the motivation behind her pursuits.

“My programme, Vying for Youth Through Counselling, seeks to tackle maladaptive behaviours caused from smoking ganja. We reach them through counselling sessions, inclusive of family therapy, behaviour modification therapy, and drug-intervention therapy with the National Council on Drug Abuse,” she told The Gleaner.

Brown-Thompson has been making inroads into the communities, reaching several youngsters with her message. It is this campaign so close to her heart that has earned her admiration among her peers and won over a panel to name her the 2019-2020 LASCO-JCF Police Officer of the Year.

A member of the force for 13 years, Brown-Thompson got the nod over seven male colleagues: Corporal Oliver Dixon of Area 1, Corporal Kevin Grey of Area 2, Corporal Leroy Chambers of Area 3, Constable Oliver Livingston of Area 4, Detective Sergeant Adrian Brown of the Counter-Terrorism and Organised Crime Division, Corporal Andrew Clarke from the Marine Division, and Segeant Nemard Knight of Mobile Reserve.

Brown-Thompson walked away with the coveted LASCO trophy, $350,000, and other prizes courtesy of LASCO. Brown was named runner-up while Livingston placed third.

Reflecting on the opportunities for women to advance in the JCF, the newly crowned top cop said females were now receiving equal consideration for promotion in the police force.

“I think there is a twist. I don’t think men are favoured over women these days, especially with Major General Antony Anderson as commissioner of police,” she said. “He has set the stage for both men and women to sit the exam and, if successful, are promoted.”

When asked if she believed women should be shielded by male colleagues in the line of fire, Brown-Thompson said: “We are trained as a force and that means togetherness. Should men or women be under fire, part of our duty is to protect each other.”

The LASCO-JCF Police Officer of the Year award programme has been running for 19 years, and according to the founder and executive chairman of LASCO Affiliated Companies, Lascelles Chin, it has been a significant morale booster for members of the JCF and the communities they serve.

“Our LASCO awardees represent the best of the JCF and the hopes and dreams of our people. They, along with the LASCO Nurse and Teacher of the Year awardees, keep the wheels of society in balance. That is why LASCO invests $30 million annually in these programmes so that we may honour their unwavering service to our people and communities. We are making the men and women of the force know that LASCO values their service and protection.”