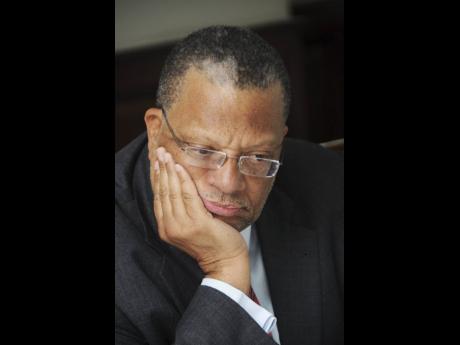 Rudolph Brown
Peter Phillips is weighing support in an extraordinary party meeting to be held today.

People’s National Party President (PNP) Dr Peter Phillips has called an extraordinary meeting of all affiliated members of parliament and councillors for today as there are even clearer signs that his reign could be challenged.

The meeting, The Sunday Gleaner understands, is scheduled to commence at 10 a.m. at the Hotel Versalles in Clarendon.

The invitees have not been informed of the meeting’s agenda but PNP insiders close to the organisers said the consultation was for Phillips to canvass support in the face of a looming challenge from former general secretary Peter Bunting, although other party issues will be discussed.

“I believe that there will be other things on the agenda such as preparation for an election and so forth, but it would be foolish to anticipate something and not be sure where the support lies. So, all of that will be involved. And to me, it is also timely because, obviously, we need that sort of engagement in the party from time to time,” the insider said.

As to whether Phillips’ likely challenger, Bunting, will be in attendance remains uncertain.

However, Sunday Gleaner sources in Bunting’s camp said he was travelling overseas and was not due to arrive until sometime today.

Some members of parliament and councillors have sent apologies as they will not be attending the meeting for varying reasons.

But with Phillips feeling the heat from the possibility of a leadership challenge, he and his allies have made swift moves to consolidate power and to drum up support.

Sunday Gleaner sources also said that Phillips met with PNP staff last Friday at the PNP’s Old Hope Road headquarters in St Andrew with a view for them to express their concerns and to address welfare issues.

He reportedly asked staff about what he could do as president to make them better off.

Phillip Paulwell, one of Phillips’ key backers, last Tuesday fired a salvo at “rebels” who threaten to disrupt the PNP in a pointed post on social-media website Facebook.

“Ambition should be instructed by the mission. Clueless rebels are usually [wooed] by reward. Personal desire should not disrupt the progress of the whole,” Pauwell, also a vice president of the PNP, wrote.

Paulwell has been among those strenuously resisting a leadership challenge.

He was instrumental in puncturing Bunting’s ballooning ambition to become party president back in 2017 after Portia Simpson Miller stepped down from the helm of the party.