One bullet, two victims - A Clarendon family’s struggle bouncing back from second tragedy after loss of parent 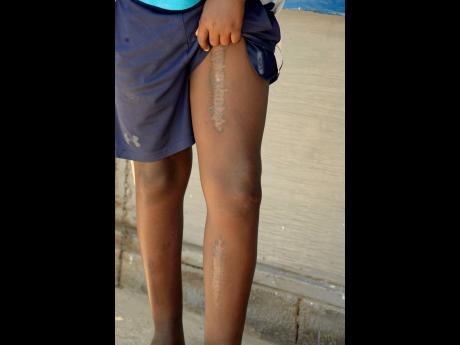 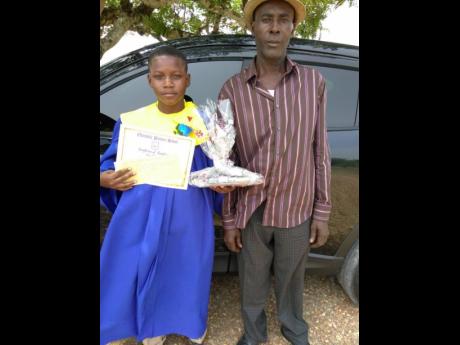 The toll that violent crimes can take on families was made real for teenager Omarion Gayle and his stepfather, Delroy Lennon, who were both struck by the same bullet while inside their Oliver Gardens, Effortville, yard two years ago.

On April 27, 2017, four days after the family buried Gayle’s mother, Terri-Ann Forrester, who died from an illness, a running gun battle between warring men almost crippled the youngster.

Lennon recalled that Gayle was outside playing as the distant sounds of gunfire crept closer.

“My big daughter, who is not Terri-Ann’s daughter, was sitting out a road. She came into the yard, saying she heard shots firing up the road and the sounds were getting closer. When everybody came inside the yard, only my stepson was left outside. I called out to him to come in. He came in the yard and was heading inside the house. Both of us were now standing in the doorway, when one of the bullets flew into the yard, went right through my right thigh, and went into my stepson’s groin area,” Lennon told The Gleaner.

Although himself injured, Lennon’s primary concern in the immediate aftermath was for Gayle, who spent weeks in hospital.

“He is like my right hand. He was in hospital for three weeks. They cut his leg in a number of places because the doctor said when the bullet entered him, it moved around all over his leg,” Lennon said. “I had to be at the hospital right through because the doctors couldn’t touch him. Everybody thought he would not be able to walk again. When we brought him to hospital, we had to lift and carry him.”

Hope of Gayle walking again came when a Rastaman shared a remedy with Lennon, encouraging him to apply it to the boy’s leg, and the now-14-year-old defied the odds to walk again, and despite occasional pain in his right leg, his stepdad has a hard time keeping him away from the football field.

“Little by little, he started tipping on the foot, until one day, I told him to go by the shop. When he went down there, he spent around one hour to how people glad fi see him. Right now, I have to quarrel with him to leave the football. When him play, sometimes it pain him,” the stepdad recalled.

Lennon, who was a tractor driver, recalled how he could not go to work anymore, especially after becoming a single parent, responsible for the two children Terri-Ann brought into the relationship, plus the two they produced together.

“I am in charge of the four children. From mi small, mi aunty used to tell mi to learn to cook, wash, and clean. I never yet call anybody to come and wash their clothes. I wash their own and my own, different days of the week, and everything run smooth,” he said.

Throughout the struggles, Lennon was assisted by the Clarendon-based James and Friends Foundation, which fully stocked a shop he operated at the front of his yard and assisted with sending Gayle to high school.

“What James and Friends has done for me, their blessings cannot stop. They have uplifted me and make me feel good. James and Friends gave him $400,000 worth of scholarship and he is able to go to school every day,” a grateful Lennon shared.

Omarion told The Gleaner that he almost lost hope because of the severe pain he used to feel.

“It was really hard for me. I couldn’t go to school, likkle boy like me. I almost gave up hope, but I got help from James and Friends, and I give God thanks for the help. The shop sends us to school. It was really hard. I had to repeat grade six. I am in high school now and I give thanks.”