Under the Gun | Gunning for disaster - As cops plug customs leaks and arrest few, guns flood nation through unofficial ports 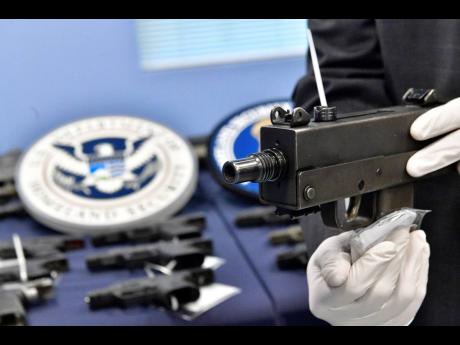 Gladstone Taylor
An agent of Homeland Security Investigations (HSI) handles one of more than a hundred firearms seized in Miami in 2017. The guns were destined for the Jamaican capital, Kingston.

Sixteen persons have been arrested for trying to smuggle guns and ammunition into the island since 2016, and of that number, only seven have been convicted as local law enforcement battles a deadly arms industry in Jamaica.

The majority of the individuals were reportedly collared as they tried to receive parcels or barrels containing 126 guns and 12,583 rounds of ammunition discovered at the wharves during the period.

At the same time, sleuths say dozens more persons are being investigated in connection with gun smuggling via more than 145 unofficial ports of entry across the island, as Jamaica’s porous borders represent the biggest challenge to the fight against gunrunning.

Acting head of the Counter-Terrorism and Organised Crime Investigation Branch of the constabulary, Superintendent Anthony McLaughlin, said that although the arrests and prosecutions are minimal, they represent a major victory in a grinding war of attrition against the multimillion-dollar weapons leakage at the island’s official ports.

“What you’ll find out is that somebody will make a shipment from the United States and send it to Jamaica. The person who is sent to clear the container very often does not know what is in the container,” he explained, adding that criminals use unsuspecting persons as their aides.

“So when you do hold on to them, while we may be able to arrest them in the initial stage, we don’t have the evidence that they know what was coming,” he explained. “So, we not making any more arrests, it is not to say that we are not doing any work, but that we are making sure these usually timely investigations are done properly.”

According to McLaughlin, the 16 people arrested were believed to be aligned to organised criminal networks.

None of the others under investigation are wharf workers, nor are any of them politicians or socialite standouts, he said, downplaying the popular belief by Jamaicans generally, and academic sceptics like university lecturer Dr Christopher Charles, that politicians are heavily involved in the illicit gun trade flowing from the United States into Jamaica. Charles, in a Gleaner story published last Tuesday, had charged that politicians were at the master controls of gunrunning.

Guns seized at the wharves are usually disassembled and their parts packaged among metal items as a way of preventing detection, said McLaughlin, relaying some of the challenges police and customs officers face in stemming the clandestine trade.

Among them is the training of some officers to detect disassembled gun parts. This began in 2016 in tandem with the Jamaica Constabulary Force (JCF), he said. Some guns, the police have theorised, enter the island in pieces and over days, are refitted by criminals upon arrival.

“If someone should send gun parts in a container load of car parts, you can understand the challenges in detecting that,” Nicely told The Sunday Gleaner at a ‘Countering Proliferation Challenges in the Caribbean’ conference at Caribbean Maritime University (CMU) last week.

Nicely said that it would be “grossly inefficient” for Customs to conduct a detailed examination of each of the 120,000 domestically landed containers for the 2018-2019 financial year.

“To assist the process, we depend on risk analysis and intelligence garnered from our own sources, as well as intelligence received from our partners locally and internationally,” said Nicely in an emailed response to Sunday Gleaner queries earlier.

He said that the JCA employs a series of “non-intrusive” screening methods, which the agency is looking to update to improve its contraband detection capabilities.

“We recognise the importance of having our front-line officers most familiar with the various types of guns and ammunition, the different methods of concealment, safe handling and, importantly, the protocols after detection to do with the preservation of evidence,” he said.

“The smuggling of major forms of contraband requires end-to-end coordination, which must be facilitated by collusion between persons with access and influence. This is a major threat to the efforts of law enforcement,” noted the JCA official.

Nicely could not say how many containers pass through Haiti before arriving in Jamaica, and what percentage originates in the United States.

Department head at the Centre for Security, Counter-Terrorism and Non-proliferation at the CMU, Assan Thompson, said Haiti is not the only facilitator of Jamaica’s gun problem, as guns are also being routed here from South America.

He said that the United States remains the largest origin country for guns entering the island, however, as marijuana and cocaine trans-shipments are exchanged for ammunition in the US, Canada and the United Kingdom.

Thompson is a retired assistant police commissioner. He was in charge of border security before leaving the JCF a year ago, and said that the gun trade between Jamaica and Haiti had its genesis in criminals selling firearms abandoned by law enforcers after civil unrests there.

“When the guns-for-drugs trade first started, it was more old guns, leftover firearms that were being sent to Jamaica, but in recent times, we are seeing new firearms coming from Haiti to Jamaica, and the assessment is saying that Haiti has moved from the era of picking up firearms to the warehousing and stockpiling of firearms for export,” Thompson said.

“Once they (Haitians) get the drugs, it goes further north, and then they get new guns, and Jamaica is the place that they send it to,” he said, adding that daily, the police seize several fishing boats believed to be used to smuggle contraband into and out of the island.

In the meantime, former police commissioner Owen Ellington, now executive director of the Centre for Security, Counter-Terrorism and Non-proliferation at CMU, offered a three-pronged solution to Jamaica’s gun-smuggling crisis.

At the first tier, the authorities need to decrease the demand for guns by young Jamaicans by bolstering and implementing more social programmes. Second, he said, attention must be paid to vector control, which includes effective border patrol and strengthening partnerships between local entities. The final stage, he said, is controlling the supply, by strengthening partnerships with source countries.

Between 1996 and 2012, the Jamaican police confiscated 12,483 illegal guns and 169,895 live ammunition from criminals. More than 85 per cent of the weapons seized were authentically manufactured handguns. The demand for guns is driven by more than 300 organised criminal gangs in the country, said Ellington.