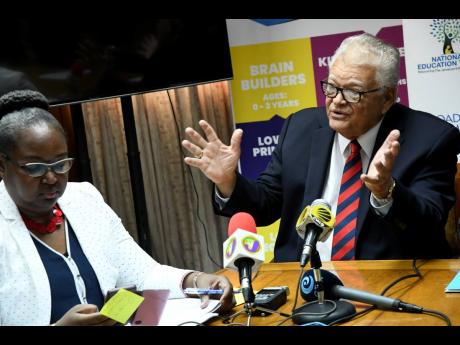 Rudolph Brown/Photographer
Karl Samuda, the minister overseeing the Ministry of Education, Youth and Information, and Permanent Secretary Dr Grace McLean speak to the media yesterday ahead of the release of the results for the inaugural sitting of the Primary Exit Profile tests this year. The press conference was held at the ministry’s National Heroes Circle office in Kingston.

A number of high school administrators say the Ministry of Education has been engaging them in their preparations for an intake of an anticipated large number of students performing below standard in a number of subject areas when the new school year opens in September.

As the ministry released the results of the inaugural Primary Exit Profile examinations this year, the data showed that just over half (55%) of the 41,617 students who sat the examination achieved proficiency in language arts and 63 per cent were deemed proficient in social studies.

For mathematics, only 40 per cent of the students achieved a level of proficiency, with 59 per cent either ranked at the developing or beginning levels. The ministry did not account for a missing one per cent.

In science, the proficiency level stood at 49 per cent.

This year’s results were released under a scaled system, with students ranked in four categories: highly proficient, proficient, developing, and beginner.

Students who did not achieve competent or highly competent grades will require remedial and special attention when they get to high school.

At a press conference yesterday, Karl Samuda, who oversees the education portfolio, said that all students were placed in full secondary-level institutions, adding that the students performed fairly well in the inaugural PEP sitting despite several hurdles.

“Based on students’ performance, it is evident that the education system at the primary level is moving in the right direction,” he said.

Orlando Worges, principal of the Edith Dalton James High, told The Gleaner yesterday that his school was among those the Government has reached out to in anticipation of it having to enrol underperforming students into remedial classes.

Worges said that his only concern was a shortage of qualified mathematics teachers.

“The education ministry has taken several steps to deal with the situation, particularly through the Alternative Pathway to Secondary Education programme. The ministry has been working on bringing down teacher-student ratio to 25-1, especially for mathematics and English, but although the ministry gives schools the go-ahead to employ more teachers, the country is facing significant deficit as it relates to qualified mathematics teachers,” Worges told T he Gleaner.

He said that PEP was better than the Grade Six Achievement Test, which it replaced, as the new exam “gives more room for proper testing and gives a truer reflection of students’ abilities”.

Papine High principal Leighton Christie said that although his institution could do with more resources, the ministry was making some effort to assist the school to cater to students requiring special attention.

“For the past three years, the ministry has been supporting certain schools in terms of giving them additional teachers to work with these students. It is not going to be enough, but they have been putting things in place. They have been supplying resources we need to work with the students, and we have coaches in the schools working with the teachers to help students,” he said.