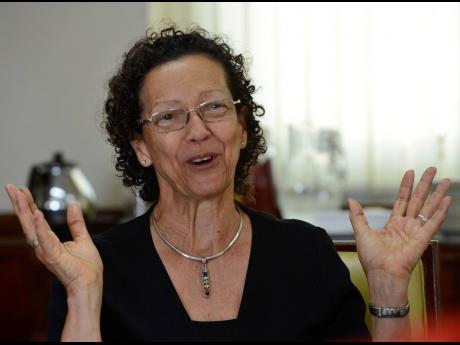 Canada, Jamaica’s northern ally and trading partner, continues to spend millions of dollars to fund and co-sponsor various initiatives under the justice reform programme, disbursing just over CDN$1 million per year since 2009, through its Justice Undertakings for Social Transformation (JUST) programme.

Canada’s high commissioner to Jamaica, Laurie Peters, said that her country has committed to spend CDN$20 million (J$1.96 billion) by 2020 to roll out several programmes in Jamaica’s reform programme. Many of the JUST programme initiatives have been completed, including the Legislative Production Management System (LPMS), and various add-ons.

Speaking at a Gleaner Editors’ Forum last week, Peters said the regional projects, Access to Justice in the Caribbean (IMPACT) and the Judicial Reform and Institutional Strengthening (JURIST) – a five-year regional Caribbean judicial reform initiative, has the Caribbean Court of Justice (CCJ) as one of the implementing partners. JURIST is done in partnership with the United Nations Development Programme (UNDP) and the Ministry of Justice.

“We have been in this game for almost a decade, and one of the first ones to partner with Jamaica on justice reforms. ... We are not the only partner now, because the European Union and the United Kingdom are now on board, but Canada had offered foundational support,” she told the forum.

Acknowledging that “Canada has seen positive momentum” and that progress has been made, she said, however, that there will still be bottlenecks in the system. As for whether Jamaica could have been more advanced in both justice reforms and crime-fighting initiatives, Deborah Duperly-Pinks, senior development officer on development cooperation, said justice takes time.

Duperly-Pinks said JUST has spent most of the decade examining institutional and technical strengthening of the reform stakeholders, including government offices such as the Office of the Director of Public Prosecutions, the chief parliamentary counsel, courts, and the Ministry of Justice.

“It’s been a lot of work and a lot has been done. And in this the last year of the JUST programme, we are trying to ensure sustainability of everything that has been created and, at the same time, moving outside of the justice institutions to engage with civil society,” Duperly-Pinks concluded.

The high commissioner said that Statistics Canada has been used to help identify backlogs across the region, and she praised Jamaica’s efforts in working to clear the logjam.

On July 19, Canada will roll out another component of the reform programme when it holds the witness care programme and conference, in collaboration with Jamaica, the high commissioner told the forum.