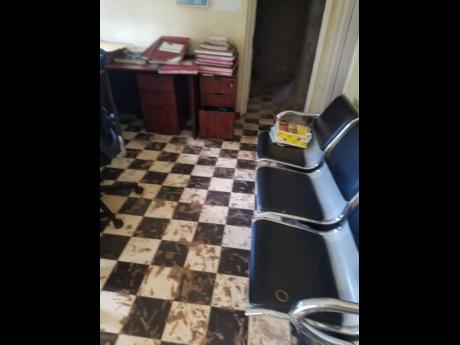 Contributed
The Guanoboa Vale Police Station is in a deplorable state.

A member of the Jamaica Constabulary Force is expressing concern over the health and safety of his colleagues and himself due to what he termed the haphazard refurbishment of the Guanaboa Vale Police Station in St Catherine.

Speaking with The Gleaner, the lawman, who requested anonymity, said that in about March last year, work was started to refurbish the station but was halted in August before being resumed at the start of November. By the end of November, work had again come to a pause, with very little progress and no explanation or word of a deadline for the work.

“The place is left open. There are no windows at some sections,” the officer told The Gleaner. “A man can even climb through the window. The old tiles throughout the building were broken up in order for them to retile, and up to now, they haven’t retiled. There are a lot of broken blocks all over with a lot of cement dust. There are even rats and mongoose in the roof area. Even a health inspector came and ordered them to shut down the station about a month ago because it is a health hazard.”

He said that the conditions have been taking a toll on the staff.

“We have to buy sinus medication because of the dust, and we still have to come to work because I don’t want them to say we are ‘forming’ sick. The member of parliament, Christopher Tufton, was spoken to about it. Even the bathroom is not in a condition for anybody to use. If rain fall, it is just like we are outside,” the frustrated cop added, urging that something be done to address the state of the station as it has been demoralising the roughly 12 cops stationed there.

“Di police dem nah put out dem all,” he told The Gleaner. “The work conditions make them feel uncomfortable. Even the reception area is horrible!”

Tufton, who is also the minister of health and wellness, told The Gleaner that he was aware of the poor conditions at the station but pointed to National Security Minister Horace Chang, who he said would be better able to give an update on the plans.

“I am aware of the situation. I have visited there several times, and the national security minister and I have spoken, and there are some plans on the way to address the situation in a more permanent way,” Tufton said.

Yesterday, Chang told The Gleaner that the plan is to close the station to build a new one.

“We are looking to close that facility and put up a new facility at Kitson Town. The conditions are extremely bad, and that is why we are closing it. I have to discuss with the commissioner of police, Major General Antony Anderson, as to when,” said Chang.