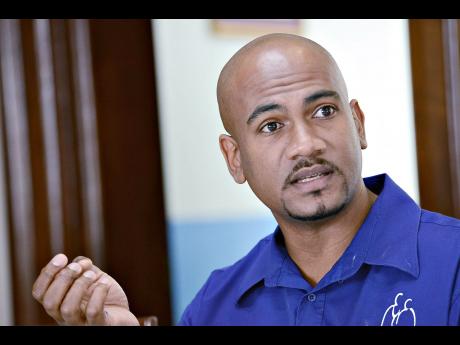 Dr Alfred Dawes... it is a general trend that we are seeing where persons are looking more into fixing up their bodies, and anything they are self-conscious about they will try to fix it...

- Known as gynecomastia, the condition can affect men of all age

- Overweight and hormone imbalance main cause of enlarged breasts in men

- Gynecomastia can be corrected with liposuction, which can cost approximately $200,000

An increasing number of Jamaican men, including teenagers, are forking out hundreds of thousands of dollars to do breast-reduction surgeries, according to reports from some of the island’s leading plastic surgeons.

Several men are now finding ‘man boobs’ unattractive, with factors such as overweight and wanting to look sexy being cited among the reasons for this growing trend for this type of surgery.

The condition of unusually enlarged breasts in males is known as gynaecomastia. This occurs when men or boys experience swelling of their breast tissue caused by an imbalance of the hormones oestrogen and testosterone. Males of varying ages can be affected – newborns, teenagers, and older men – when unusual changes occur in hormone levels.

One or both breasts can be affected, and though not life-threatening, men sometimes experience increased sensitivity or tenderness, and some find it embarrassing.
Weight loss, laparoscopic, and general surgeon, Dr Alfred Dawes told The Sunday Gleaner that male breast-reduction surgery has become a fairly common practice in Jamaica.

“It’s common and it’s getting even more common now. In fact, it is a general trend that we are seeing where persons are looking more into fixing up their bodies, and anything they are self-conscious about they will try to fix it,” he said.

“So even just now, I had a patient who is just hitting puberty and has gynaecomastia. He had lost some weight and had redundant skin, so we had to do a correction,” Dawes shared last week.

“So we do have some teenagers coming in, but we have males who have had the condition for quite some time and they either are just becoming aware that it can be fixed, or they just decided that that is what they want to spend some disposable income on to get rid of an area of concern.”

While noting that he can’t provide numbers because a comprehensive study has not been done to see how prevalent the practice has become, Dawes stressed, “So yes, we are seeing more requests for that type of surgery. I don’t know if it’s self-selection, where more males are coming in with it why we are seeing an increase, or if it is related to the obesity epidemic that we are having, but the condition tends to affect more overweight persons. So as the population gets more overweight, we tend to see more of that.”

Gynaecomastia can be corrected with liposuction, which is having the excess fat removed from the breast or by removing the breast gland tissue.

“You can’t just exercise it away. It’s a stubborn fat area, and so it’s difficult for some people because of genetics. You can have an improvement, but if it is the gland that is the issue, true gynaecomastia, there is nothing you can do but to take it out,” said Dawes.

The surgeon said the cost for liposuction on the chest area can be approximately $200,000; however, for removing the breast gland tissue, it can be less, depending on how big it is.

Consultant plastic surgeon Dr Rajeev Venugopal noted that in his practice, gynaecomastia surgery is a common request he gets from male teenagers.

“It comes down to multiple factors that can cause the condition – it can be from hormones, it can be medication – and it happens in three groups: at birth, in puberty, and as men get older,” said Venugopal.

Venugopal pointed out that some medication for prostate cancer treatment, blood pressure, and drugs for treating an ulcer can cause gynaecomastia.

He also noted that as with all surgeries, there are risks involved.

“No surgery is easy. After doing the surgery, you will probably need two weeks minimum to recover. While it is done as an outpatient, as in you are not admitted to hospital, you do go under anaesthesia, and if not careful, as you get older, if you put on a lot of weight, there might be a chance that it will come back,” stated Venugopal.

Substances that can cause gynaecomastia:
- Alcohol
- Amphetamines
- Marijuana
- Heroin
- Methadone

When to see doctor

If you have:
- Swelling
- Pain
- Tenderness
- Nipple discharge in one or both breasts

Treatment:
Usually, no treatment is needed; most cases of gynaecomastia lessen with time. Surgery is usually not recommended unless the gynaecomastia is causing severe pain and tenderness or embarrassment.