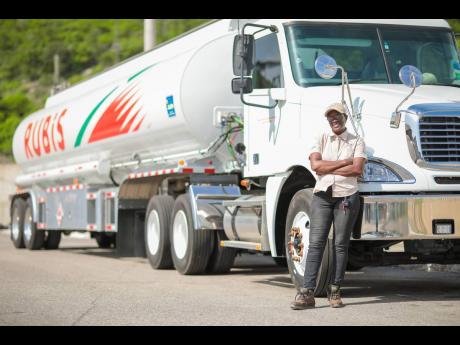 When Carol Clarke got around the steering wheel of a Lada for her first driving lesson, the 20-something showed the diminutive Russian-made motor car that she had bigger beasts to conquer.

Her spunk so impressed her driving instructor, a Mr Miller who now resides in England, that he predicted that she would rise to newer challenges.

“While I was learning to drive, he usually said to me, ‘You have very good judgement, you know. If you continue, you will drive any ‘vehicle,’” said Clarke, who went on to become a driving instructor for two years after acquiring her licence.

“It has always been my wish to work with RUBiS. When I heard about the job opening, I was quick to apply,” said Clarke. But her fascination with trucks began when she was just a little girl.

“As far back as I can remember, if I was going on the road and I heard a truck coming in the distance or if I was walking with my mom, she couldn’t move until the truck come and gone out of sight,” said the self-confessed tomboy, admitting that while growing up, she preferred trucks to dolls.

“Ms Clarke was actually one of two females amongst several males to apply for the post. She possessed the necessary skills and qualifications for the position and was deemed most suited based on RUBiS’s high standards,” he said.

RUBiS is in the advanced stages of qualification for certification in the United Nations Development Programme Gender Equity Seal Programme.

Clarke says that when she leaps into the trailer truck daily to make deliveries across the island, onlookers are often amazed that she, in fact, is the driver of the behemoth that holds up to 33,000 litres of fuel.

“They would normally say, ‘Yuh voice too fine to be a driver. Look at yuh how yuh likkle bit.’ It’s a lot of excitement when I go on the road and drive, especially when I’m backing up the trailer and all of that.”

Clarke is thrilled at the opportunity of being a trailblazer and hopes that her pioneering feat will encourage more women at RUBiS, and beyond, to take on new challenges.

“I know this will encourage other women to break free from gender stereotypes in the work environment and to follow their dreams. I am treated equally by the other truck drivers,” Clarke told The Gleaner.

“They don’t treat me any different or suggest that I am unable to complete any of my tasks because I am a female, and this is why I am so excited to be a part of this team I consider my family,” Clarke said.