‘Vaz larger in passing than in life’ 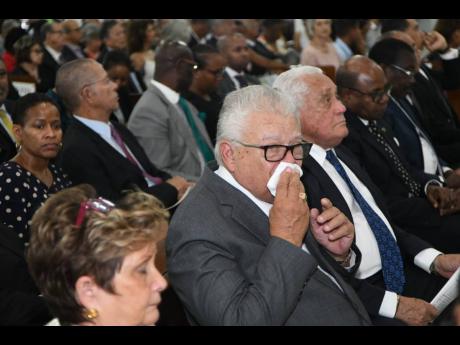 Rudolph Brown/Photographer
Minister Karl Samuda wipes tears as he sits among other Jamaica Labour Party officials after reading a remembrance at the service of thanksgiving for the life of former Cabinet colleague Douglas Vaz at the Stella Maris Roman Catholic Church in St Andrew yesterday.

The full impact Douglas Crompton Vaz had on individual Jamaicans from all walks of life only really came to light after his passing, eldest son Ricky Vaz confessed during yesterday’s thanksgiving service for the former parliamentarian.

“Doug Vaz was larger in passing than in life,” Ricky told mourners gathered at the Stella Maris Roman Catholic Church in St Andrew.

He said that the outpouring of love and sympathy was quite unlike anything he had anticipated.

“The most amazing thing is that it seemed each person he interacted with was left with an indelible memory,” the younger Vaz noted of his father.

Vaz, a four-term member of parliament who served as a Cabinet minister in the Edward Seaga-led Jamaica Labour Party (JLP) administration from 1980 to 1989, died last week Sunday.

Daryl Vaz, minister without portfolio in the Office of the Prime Minister, injected some humour into the service for his father by poking fun at his own US visa woes.

In acknowledging Abe Dabdoub, who switched allegiance from the JLP to the People’s National Party (PNP) and mounted a dual citizenship court challenge to Vaz’s election victory in 2007, he had this to say: “Despite my political rivalry and legal wrangling with Abe Dabdoub, who I knew as Uncle Abe, he not only visited on the day of daddy’s death, but he is here to celebrate his life. By the way, Abe, since you were successful against me in my US citizen case, I may need to talk to you shortly,” his latter comment sending the congregation into laughter.

Daryl’s Cabinet colleague Karl Samuda, who knew the elder Vaz for 47 years and was said to have grown to love him more as a brother than a friend, recounted their last catching-up.

“We sat for almost three hours. It was a very merry old visit,” Samuda recalled, before going on to detail some pivotal events which influenced Vaz to enter representational politics and on a JLP ticket.

Samuda pointed out that up to 1974, Vaz had shown no interest in politics beyond the ordinary, but three events in rapid succession had a profound effect on him.

“First was [the establishment of] the unconstitutional Gun Court in 1974 and the charging and arrest of one of his good boyhood friends, Tony McKenzie, the godfather of one of his sons, for possession of a .22-calibre sporting rifle and put in jail for indefinite detention,” Samuda said.

The announcement that Cuba’s President Fidel Castro was to be invited on an official visit to Jamaica created extraordinary concern within the private sector and triggered action from Vaz.

“As a president of the JMA (Jamaica Manufacturers’ Association, Douglas displayed arguably his first sign of leadership when he immediately took the initiative and convened a meeting at the then Sheraton Hotel. At the end of meeting, it was determined that there would be a total rejection of the suggestion that Fidel Castro should be invited to Jamaica that time. It was at the height of the Cold War,” Samuda recalled.

However, it was the declaration of state of emergency by Prime Minister Michael Manley on June 19, 1976 that would cause Vaz to cast his lot with the JLP.

“For Douglas, that was the last straw. He immediately took the decision to join the Jamaica Labour Party and to contest a seat in the next election.”

Thereafter, he was transformed into one of the finest political campaigners Samuda had the privilege of working with, and in 1976, won the North Central St Andrew constituency, a first for the JLP. He won again in 1980 as well and was returned to power when the PNP failed to contest the 1983 election. Vaz became MP for North East St Andrew for a single term when the constituency was created ahead of the 1989 general election, but was defeated by the People’s National Party’s Karlene Kirlew-Robertson in the next general election in 1993.