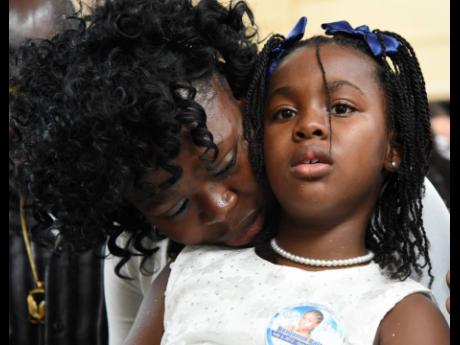 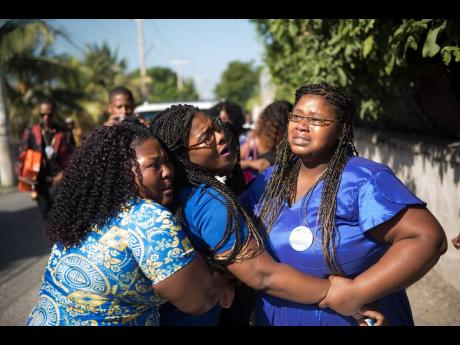 Gladstone Taylor/Multimedia Photo Editor
(From left) Kayon Henry, Jamela Levy, and Donna Hutchinson are overcome with grief moments after viewing the carriage containing the coffin with Benjamin Bair moments before departing from the family home for the North Street Seventh-day Adventist Church on Sunday.
1
2

Hours before she bade her final farewell to her late brother, eight-year-old Seraphine Bair was a picture of worry as she dreaded the future without her pal.

Seraphine longs for Benjamin Bair for a host of reasons, among them that he was her biological alarm clock.

“The whole thing I miss about my brother is that every time when I wake up, he was always the one to wake me up. It makes me really sad,” she told The Gleaner at the family home yesterday.

Seven-year-old Benjamin was crushed to death by a garbage truck while he waited to be picked up from Clan Carthy Primary School, where he was a grade two student at the time, on the afternoon of Monday, October 28.

As they prepared for the boy’s funeral, family members looked on nervously, fearing that Benjamin’s mother, Japhene Campbell, would have been too grief-stricken to attend the thanksgiving service held at the North Street Seventh-day Adventist Church.

As the family reminisced on Benjamin’s life, their grief was stirred as the hearse bearing Benjamin’s coffin stopped near their home on Ivy Road, Kingston 5. The sombre, funereal silence was broken by the wailing of weeping women, as family, friends, and neighbours rushed on to the roadway to get a glimpse of the boy.

Benjamin would have joined Seraphine in spending the holidays with their aunt, Shernette McDonald, in Kensington, Portland, where he last visited in July.

“He was just so nice. My husband is a Rastaman and called him ‘Benji Mi King’. He was so obedient and cool. They were planning to come back to me visit me next week for the Christmas period. He and his sis like it up there in the country,” McDonald told The Gleaner.

She recalled him as being full of life in her husband’s company, having fallen in love with the adventure of the great outdoors.

“He loved to visit places with my husband. They would go around in the district, and anywhere my husband went, he wanted to go. My husband does spearfishing at night, and he and his sister set up until he came back from sea just to see the fish and all of that,” McDonald added. “He was just so cool. He loved everything from going to the farm to playing with caterpillars.”