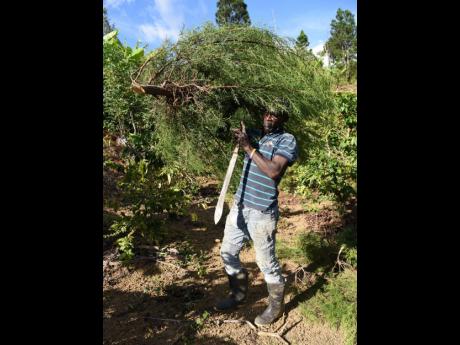 Ian Allen/Photographer
Euton Rodney carries a Christmas tree from his farm in Penlyne Castle to prepare for it to be sold in Kingston.

Penlyne Castle farmer Rudolph Watson has credited his longevity in the cultivation and sale of Christmas trees to his rootsy charm and customer-service savvy.

Watson, who is affectionately called ‘Ruddy’, said that tree sales have allowed him to walk into luxurious homes he would have otherwise only admired from a distance.

“Is one thing the people really want from us – yes, our trees are what they pay for, but [what they] really want is to feel part of something different, and because we deal with them with respect and courtesy, they stick with us,” he said, while explaining his ability to connect with clients.

The green thumb has been cultivating Christmas trees for well over 20 years and continues to build his customer base, which he says is committed to him as the provider of their “favourite trees”.

As luck would have it, Watson received a telephone call as he spoke with The Gleaner while tending to a few trees on a friend’s nearby farm.

On the other end of the call was Von, who describes herself as a long-time client of Watson’s.

“I would say I have been buying trees from Mr Watson for about 10 years or more now, and I keep coming back because Mr and Mrs Watson are awesome people, and ... we have a great relationship,” she said.

Von shared how she gathered a group of friends who have become regulars in Watson’s clientele and who have become so loyal that they would never think of buying trees from anybody else.

“I would ask Mr Watson to bring trees to the house, and we all choose our trees from there. This happens every year,” she told The Gleaner.

Watson, who previously held other jobs, said that his involvement in Christmas-tree production has burnished his status among some of Kingston’s elites as what started out as a handy side job quickly became a serious option besides the cultivation of coffee, which has suffered a downturn in price.

“It takes a lot to grow and to shape all these trees you see around you. But I can tell you, it takes a lot more to find and keep your clients for the number of years some of us have them,” Watson said.

Alex Smith, a fellow St Thomas native, who also has a pine tree grove, insisted that the key to remaining relevant in the ever-expanding business is to be “real” with the clients and to put the best-quality trees on the market.

“When we set up at Village and Mall Plaza and all the people dem looking, we have to make them feel special, you know. Even though most of our sales are from uptown people, we show them respect equal to the man from downtown, because they spending their money with me,” he said.

“Every year, this business gets bigger and bigger, and more people will eventually want to be part of it, and that’s good, but it mean seh people like me and Ruddy have to be on top of things, making sure we have our clients coming back to us every time,” said Smith, another 20-year veteran of the industry.