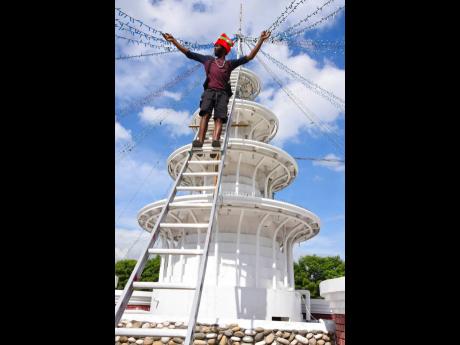 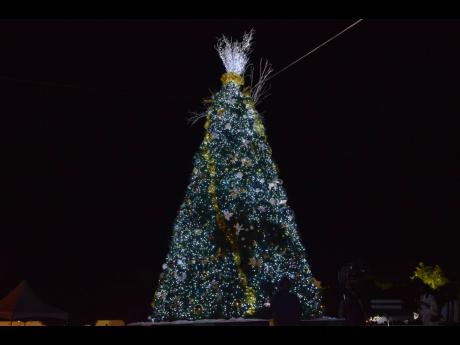 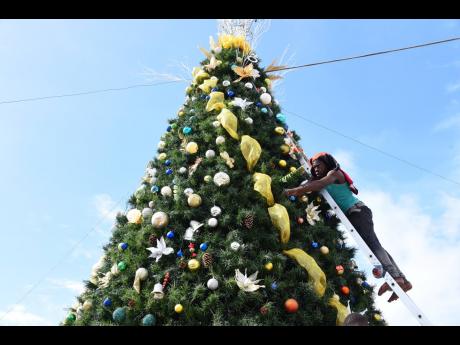 Ian Allen
One of the decorators of the Christmas tree in St William Grant Park in downtown Kingston on Thursday. 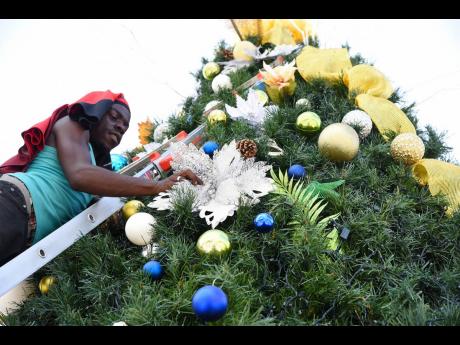 Ian Allen
One of the decorators preparing the Christmas tree in St William Grant Park in downtown Kingston on Thursday.
1
2
3
4

Maxfield Avenue resident Chevaughn Peart has not had a night’s sleep in his own bed for more than a week. For him, sleep is a luxury when you are rushing to prepare the St William Grant Park in downtown Kingston for the bustling Christmas weekend.

Peart, 24, and his crew of seven inner-city youths spent last week upholstering columns and erecting more than 5,000 Christmas lights to the huge centre fountain, a Christmas tree for last Thursday’s tree-lighting ceremony, and dozens of other greenery and poles in the park.

He has been doing this for the last four years and has been dubbed the ‘One Don’ by colleagues who hold his keen eye, professionalism and attention to detail in high regard.

Most of them had been sleeping on cardboard and sheets around the concrete base of the park’s water fountain, sometimes for no more than three hours at a time, he said last Wednesday.

As they slept, the fountain’s half-finished Christmas decorations provided a towering reminder of the work still left to do. It did not help that the lights arrived nine days behind schedule, or that last Tuesday Peart had to fire two of his workers who he said tried to steal boxes of Christmas lights from the worksite.

“It is roughly about 5,000 lights to do everything. The Christmas tree alone going to take about 900 (Christmas lights). Dem ting yah take about 10, and the tree dem will take three-three,” said an exhausted but proud Peart last Wednesday, pointing to sections of the park.

“We partly finish now, but we want to finish everything by the latest this weekend. Some areas have to be closed off by this evening for tomorrow, so we are trying to get those things out the way,” he explained on Thursday, hours before the Kingston and St Andrew Municipal Corporation’s (KSAMC) tree-lighting ceremony inside the park.

Peart said he went to sleep at four Thursday morning and was awake by 7:30 a.m. By midday, much of the area for the tree-lighting ceremony had been decorated, leaving him with even less time to skilfully climb a series of crooked ladders to reach the top of the unfinished fountain.

“To how the work level is, if we leave fi go home it (work) nah go done. Me done work three a morning, and if me go home me not going to get fi come back here by eight. Me going to reach about 12-1 (p.m.), and the work is going to fall behind time,” he explained.

Mayor of Kingston Delroy Williams on Thursday told The Sunday Gleaner that $4 million to $6 million is spent each year to prepare the park – a key landmark for Christmas festivities downtown.

Most of the budget is covered by sponsorships from state and private entities, he said, describing the residual costs incurred by KSAMC as “minimal” after all the donations have materialised.

Peart said public adoration, even though most persons are not aware of his team, has motivated him over the years – even though he has had to dip into his own pocket to meet the shortfalls of a limited budget.

“The work wants more man but, to how the budget set, we can only afford seven,” he said, adding that his team members are all from nearby garrisons, and often cannot finance themselves over the days of decoration, especially without a downpayment from the authorities.

Stealing, however, is not an option under his watch.

“A prison work dem ting deh. All of us are garrison youths, but we can’t tolerate any stealing on the site. That makes it bad for all of us,” he said.

“Me like fi hear when the people dem siddung all somewhere and a talk about how the park pretty. Some of them ask is who do it, thinking that is a big man, but dem wouldn’t even know it is a 24-year-old and some young youths do this,” said Peart, with a proud smile.

“At the same time, me still a give back to mi community same way. We would love the money to be better but it brings a joy to me every year,” he said, beaming.