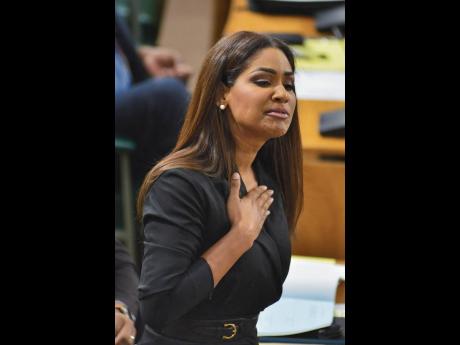 When Opposition Member of Parliament for South East St Ann, Lisa Hanna, repeatedly refused an order to sit down yesterday afternoon, it was evident that Speaker Pearnel Charles Sr was facing open mutiny in the House of Representatives.

With his back against a wall, he called on House Marshal Captain Wayne Blake to remove sanctioned Hanna. But as Blake made his way towards Hanna, who continued to stand in defiance of Charles, the burly St Andrew South East MP Julian Robinson broke from his seat and moved in the direction of Blake, who then retreated.

Charles was the subject of harsh criticism from the Opposition as he sought to muzzle members of ­parliament from debating the controversial auditor general’s report on a litany of breaches and questionable spending at the Caribbean Maritime University (CMU).

The Speaker stoutly defended his decision to act as his own legal counsel in deciding the ground rules ahead of the long-awaited report being tabled.

Charles, who had come under pressure from the Opposition at the last sitting, had yielded to calls for the tabling of the document, the contents of which were first published by The Gleaner.

In his opening remarks, Charles declared that he would not allow debate on the matter, citing the Constitution as his defence against prejudicing the “fair trials of persons who are so charged in relation to matters concerning the same report in the St Andrew court”.

Charles attempted to proceeded to allow a statement by stand-in minister with responsibility for education, Karl Samuda, but Opposition Leader Dr Peter Phillips, supported by desk-thumping colleagues, demanded that the Speaker disclose the basis of his pronouncement on constitutional matters.

“Did you receive legal advice or did you advise yourself?” he asked.

An indignant Charles shot back at Phillips

“As the Speaker of the House and one who is qualified, and one who has been to university like you and obtained a degree in government, I advised myself according to the Standing Orders,” Charles fumed.

Charles was also embroiled in testy exchanges with Ronald Thwaites, MP for Kingston Central, who chided the Speaker for imposing a gag order on debating the CMU report and for treating him like “a child”.

“There is nothing in parliamentary practice in history that allows an officer of any Parliament to interrupt and put down any particular matter which does not breach Standing Orders.

“You made a statement and I am wishing to preserve and embellish the office of the Speaker by pointing out that what you have suggested is nugatory – it can have no force because that which you would wish to suppress is already in the public domain,” Thwaites said.