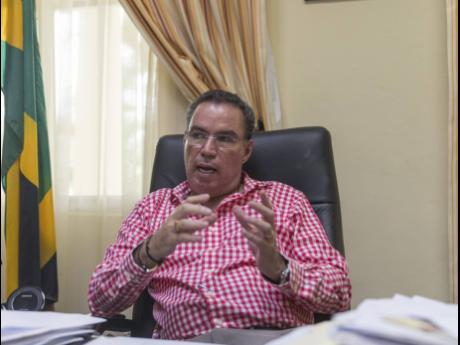 Close to 1,200 residents in 10 St Elizabeth communities affected by a dust nuisance emanating from the JISCO/Alpart mud lake in the parish have been offered a J$40-million compensation package after days of discussions, at times heated, with the bauxite company about their concerns.

Daryl Vaz, minister without portfolio in the Ministry of Economic Growth and Job Creation, said yesterday that the affected communities of Upper Warminster, Myersville, Alvalley, Lower Warminster, Upper Brinkley, Northampton, Lower Brinkley, Austin, Bounevista Housing Scheme, and Genious are to receive the compensation from the management of JISCO.

“JISCO has agreed to compensate for the dust events that took place in December and one which took place in early January, at total settlement for four days compensation,” Vaz told residents, following a visit to the affected area.

He added: “Some will get tomorrow. Some communities will get a part payment tomorrow [and] if that is the case; they will get the remaining compensation by the end of February. That is a commitment that has been made by JISCO.”

Vaz went on to note that investigations would continue into dust nuisances that occurred after December and early January and that JISCO would finalise compensation in those cases as well.

The JISCO/Alpart refinery was shut down last year to facilitate a modernisation and expansion project expected to continue into 2022, but dried sections of the mud lake, accosted by strong winds, send massive dust clouds into the surrounding communities. It was reported that one school had to shut down for at least a day as a result of the dust nuisance.

Yesterday, some residents said they were dissatisfied with the level of compensation, arguing that while it provides money that they didn’t have, they were still experiencing the dust nuisance.

“That little compensation money can’t go far. We are still hampered. We can’t even get a good shower,” said Marvinia McLeod, a resident of the area.

Paul Hanson, who also resides in the area, said his main concern was to see the dust nuisance fixed so that normal life could return to the community.

“Dust has been affecting us for almost 30 years now, and all the previous owners of the bauxite plant have treated us very bad, and now the Chinese owners are about to do the same, “ said Hanson, exuding his pent-up frustration,.

But despite the compensation, Vaz also pointed to the lack of rainfall since last year as one of the factors contributing to the dust nuisances. He said that the last time it rained in St Elizabeth was on December 10 when it temporarily halted the dust nuisance from the mud lake, which is located on 650 acres of land.