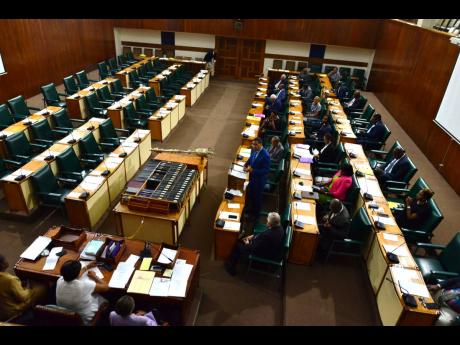 Kenyon Hemans/Photographer
Prime Minister Andrew Holness makes a statement to Parliament during a hastily arranged sitting of the House of Representatives yesterday. The Opposition said they were informed too late and had counterproposed a Wednesday morning sitting.

A 58-year-old man who had a travel history to France and was recovering from COVID-19 died yesterday at The University Hospital of the West Indies (UHWI), as government officials intensified calls for Jamaicans to limit movement and interaction to rein in the outbreak.

A teenager from Kingston has also been tested positive for the disease.

The Ministry of Health & Wellness reported that the 58-year-old patient was found unresponsive and was noted to have had a cardiac arrest. It says resuscitation measures were unsuccessful.

Up to news time, it could not be ascertained how the patient contracted the disease or when he tested positive for COVID-19.

France, one of several countries on which the Holness administration had initially triggered travel restrictions before closing Jamaica’s borders to incoming passenger traffic altogether, reported a record 499 deaths in a day, pushing the country’s death toll from the novel coronavirus to 3,523.

The two new cases are a 48-year-old female from St Elizabeth, with a travel history from Boston and Atlanta in the United States, who arrived in the island on March 24.

The second is a 13-year-old boy from Kingston and St Andrew. The ministry says his mode of transmission is under investigation.

To date, the ministry is reporting 24 imported cases and 11 import-related ones. Three cases are now under investigation.

In the meantime, a second patient – a so-called Patient 3.1 from St James – has recovered from COVID-19 and been ­discharged from hospital. Patient Five was the first COVID-19-infected person released from state care.

On March 18, Jamaica recorded its first COVID-19 death. The deceased was a 79-year-old man from Corn Piece, Clarendon, who had returned from New York.

He died while being transported to an isolation facility at the Mandeville Regional Hospital in Manchester.

Yesterday, Prime Minister Andrew Holness again appealed to persons who arrived in the island between March 18 and 23 to self-report on the website jamcovid19.moj.gov.jm or to call 888-ONE-LOVE.

Under the Disaster Risk Management Act, persons who arrived in the island during this period and failed to self-quarantine could be slapped with fines amounting to $1 million or 12 months’ imprisonment.

“Right now, we have managed to contain ... (the virus). ... Many of them have not been faithful to the quarantine rules. That’s the biggest threat we have right now,” Holness told members on the government side in Gordon House yesterday.

The parliamentary Opposition were a no-show, saying that they could not have attended the sitting owing to the short notice given.

The Opposition explained that it received an advisory from Parliament that there would be no sitting today.

It also said that around 3 o’clock, the Parliament sent an email advising that the sitting was back on. The media had received correspondence sometime after 1:30 for a 2 p.m. start.

Before that, though, Leader of Government Business Karl Samuda ​had called Leader of Opposition Business Morais Guy to advise of the development.

Guy said he received the call at 12:45 p.m., by which time all opposition MPs had made alternative arrangements.

“It was unreasonable to expect them, many of whom are in rural constituencies, to come to Parliament with less than one hour’s notice,” he said.

Guy said he had proposed to Samuda to convene a meeting of the Parliament as early as Wednesday morning.

At the opening of the sitting Tuesday, Samuda highlighted that “not a single member” of the Opposition was in attendance.

“I don’t know of any event that would rise to the level that would necessitate them not being able to be present in the House today or to even have a representative from the Opposition to participate in this presentation.”

Twenty-one of the 34 government MPs were in attendance.