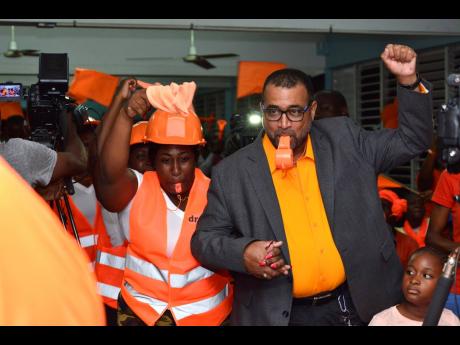 WITH THE sudden resignation of Dr Winston De La Haye, the People’s National Party (PNP) caretaker for St Catherine East Central, the party says it is moving to swiftly find a replacement in the constituency.

But as news of his resignation surfaced yesterday, PNP insiders told The Gleaner that De La Haye was facing internal wrangling with some influential organisers in the constituency.

De La Haye claimed he received a death threat which led him to quit the seat.

However, he did not say who made the threat or whether it has been reported to the police.

De La Haye could not immediately be reached by telephone yesterday.

However, in a statement, the PNP acknowledged De La Haye’s resignation.

The party said that it regretted the decision and thanked De La Haye for his service.

PNP sources told The Gleaner yesterday that De La Haye delivered the resignation letter to the party on Friday. In the missive, the psychiatrist told the party that his family was concerned about the threat he received.

The Gleaner understands that De La Haye outlined the issue in a letter to General Secretary Julian Robinson.

Yesterday, Political Ombudsman Donna Parchment Brown told The Gleaner that her office had not received any complaints from either De La Haye or the PNP about a threat on his life.

Still, Parchment Brown said she was very unnerved by the development.

“I am very concerned because not so long ago, in 2016, two persons actually lost their lives,” she said.

PNP organiser and mayor of Spanish Town, Norman Scott, whose name has been raised as a possible replacement for De La Haye, said that he was not interested in the seat.

Scott had been caretaker for the party before De La Haye was parachuted in and installed there on February 16.

Efforts to reach Denise Daley, the regional chairman in charge of St Catherine, were unsuccessful.