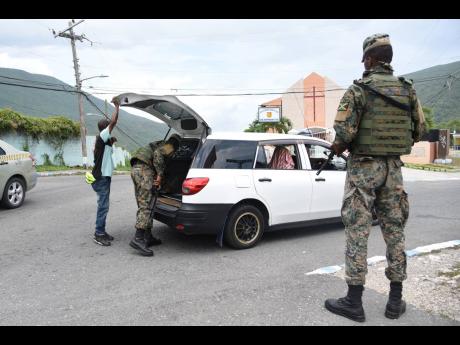 Kenyon Hemans/Photographer
Members of the security forces conduct a search of a vehicle at a checkpoint in August Town, St Andrew, yesterday as a zone of special operation went into effect in the area.

The dismantling of at least seven heavily armed gangs and the restoration of peace will be the major focus for the security forces in August Town, St Andrew, where a zone of special operation (ZOSO) was declared yesterday.

The community, which is 4.7 square kilometres, has witnessed a flare-up of violence that has resulted in seven murders and 14 shootings since the start of the year. All of these incidents have been gang related.

Prime Minister Andrew Holness says that August Town is in need of urgent intervention as the community is a source of crime in the St Andrew Central Police Division.

“The presence of major gangs in the community, as well as a number of other less-organised gangs, has, over the years, contributed to the level of crime. Additionally, the criminal activities of these gangs are not only restricted to the geographical boundaries of the community, but have negatively affected other areas,” he said in a press briefing yesterday.

August Town has benefited from several anti-violence social-intervention efforts over the years, and in 2016, it was celebrated for having zero murders recorded. But in recent times, the community, which is a stone’s throw from The University of the West Indies, Mona, has witnessed an upsurge in violence.

“It is deemed necessary and suitable at this time to apply targeted measures and restore public order and sustainable peace, and in so doing, ensure enduring transformation of the community,” Holness said.

Senior Superintendent of Police Jacqueline Coombs of the Jamaica Constabulary Force and Major Kevron Henry of the Jamaica Defence Force are to be jointly in charge of the operations within the zone.

Commissioner of Police Major General Antony Anderson said that several members of the gangs that are engaged in conflicts in August Town are residents of the community.

“These gangs disrupt the lives and livelihood of the residents and hijack any social-intervention process implemented within the community,” said the police chief.

He said that arrests are expected in the next few weeks as the security forces conduct a thorough search of the space.

ZOSOs were launched in Denham Town, West Kingston, and Mount Salem in St James over two years ago as part of the Government’s crime-reduction strategy. Greenwich Town in the St Andrew South Police Division was also placed under a ZOSO on July 1.

“When the citizens feel safe, it will increase their cooperation with the police. They will be able to disrupt the gangs, find them, prosecute them, and get them off the streets ... ,” Chang said.