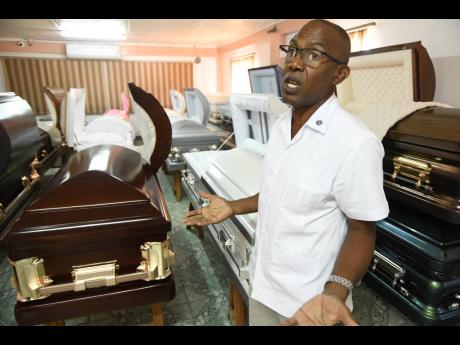 Rudolph Brown/Photographer
Michael Jones, director of Jones Funeral Home and Supplies, speaks about his hopes of a recovery of fortunes in the funeral industry.

Stakeholders in the funeral industry say the phased reopening of economic activities in Jamaica has breathed new life into their business operations, though they are a long way off from recovering to pre-COVID-19 levels.

They remain cautiously optimistic, however, about the potential for full recovery as the pile-up of bodies in storage is easing as families travel back to the island to attend funerals.

Scott Roman, managing director at the more than 80-year-old family-owned operation, Roman’s Funeral Home, said that some aspects of the business were not impacted by coronavirus restrictions and noted that new income streams have emerged amid the outbreak.

“What we are now pushing as part of any funeral arrangement is live-streaming services. Many people still cannot be at a funeral, so streaming gives those locally and overseas the ability to participate in the grand send-off of loved ones,” said Roman.

The Disaster Risk Management Act has been varied to allow for up to 50 guests to attend funerals but no more than 15 can witness burials. Social-distancing rules dictate that congregants be six feet apart.

He said that burial delays have resulted in storage issues and a lack of fresh revenue.

“In other words, the bills keep coming, but the revenue isn’t coming along quite as quickly, so we definitely had to restrict business hours to reduce cost,” Roman said, citing the closing of offices on Sundays.

Since the onset of COVID-19 in Jamaica on March 10, Roman said that the majority of mourners have been waiting for coronavirus restrictions to be lifted to have their funerals “the old-fashioned way”.

Roman said that other vital services, such as printing, have seen a huge decline as large quantities of programmes were no longer required.

Funeral homes produced, in the past, up to 400 copies of programmes per funeral. That number has plummeted to 40 or so in line with coronavirus protocols.

At the height of the infection-slowing restrictions, including quarantines and 12-hour curfews, Leroy Braithwaite said that his business, Braithwaite Funeral Home Ltd, suffered a $1.5-million decline in revenue over the months of March and April and that his recurrent expenditure was driving him further into debt.

In the meantime, Sonia Lewis, managing director at Lewis Funeral Home in downtown Kingston, said that the easing of measures will ultimately revive funeral-home operations.

“The relaxed measures gave families time to bury their dead and have relieved us of the burden of storage,” she said.

Michael Jones, proprietor of Jones Funeral Home and Supplies, located at 92 Oxford Street in downtown Kingston, said that the major concern he found is that people are still taking a longer time to bury their deceased.

“Now we open up, but we still have the same problem in that people still not coming in from overseas, which is limiting our operations to some degree, because we have bodies on ice upward to four months now and which will not be buried until about August,” he said.

“I still cannot pressure the families about storage because we know things are difficult at this time for many people and we need the business, so we keep doing what we have been in hope things will get better,” said Jones.