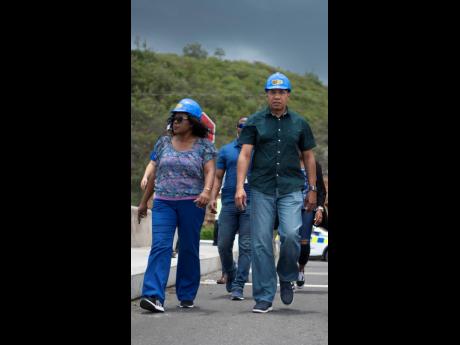 File
Permanent Secretary Audrey Sewell walks alongside Prime Minister Andrew Holness during a tour of an overpass on Mandela Highway on Sunday, July 21, 2019.

The Public Administration and Appropriations Committee (PAAC) heard conflicting accounts on Wednesday that Prime Minister Andrew Holness offered “no objection” to the controversial sale of a beach property in Ocho Rios, St Ann, for US$200,000 when the real estate was valued at US$3.5 million.

Sale of several Urban Development Corporation’s (UDC) properties in Ocho Rios to Puerto Caribe Properties Limited in the sum of US$7.2 million featured in a report sent to Parliament in April 2019 by former contractor general Dirk Harrison.

Puerto Caribe Properties Limited, operators of Moon Palace Hotel, has since signalled to the UDC that it wants to rescind the land sale agreement, saying its name and brand were the subject of political discussions inimical to its reputation.

At Wednesday’s PAAC sitting, Audrey Sewell, permanent secretary in the Ministry of Economic Growth and Job Creation, was adamant that the first UDC submission did not include the beach. “It’s two times we got submission from UDC,” Sewell said, adding that the first was for the sale of lands, not including the beach, for US$7.2 million.

“And then UDC wrote to the ministry to say there was an omission on their part,” said Sewell, adding that it should have been included in the original submission.

However, committee member Mikael Phillips argued that the first submission included the US$200,000 for the beach property, which pushed the total sale price to US$7.2 million.

Phillips asked the permanent secretary if the PM had been aware, before giving his “no objection”, that the additional US$200,000 was for the beach.

“It was a genuine omission on our part,” she insisted. “We make mistakes, Chairman. We are not going to cover it up,” she said.

“Are you saying to me that prior to the submission, the prime minister knew nothing of the negotiated price for the beach?” Phillips queried.

Sewell replied: “I cannot state as a fact that he did not know. What I can state is my responsibility is to put the facts before him as given by the UDC coming out of the board deliberations, decisions, and recommendations.

“Whatever we got from the UDC went to Cabinet through the prime minister.”

Phillips quipped that it was a “US$3.3-million omission”.

“I have stated the facts. I am not going to give an opinion,” Sewell hit back.

Committee member Fitz Jackson bemoaned that it was US$3.3 million that had been omitted from the submission.

However, general manager of the UDC, Heather Pinnock, questioned the scale of the omission.

“The agreed figure put forward by the UDC management to the board, which was approved, was the US$7.2 million for everything,” she said.

She noted that only the volume and folio number were missing from the submission.

Harrison, in his report, had strong criticism for the Holness administration, charging that the lands were sold below market price and that the Government did not optimise income from the divestment process.

He also charged that former minister in the Ministry of Economic Growth and Job Creation, Daryl Vaz, influenced the sale of the lands below market value.

However, Vaz has since rejected the claims, calling them “false, disingenuous, and without evidence”.