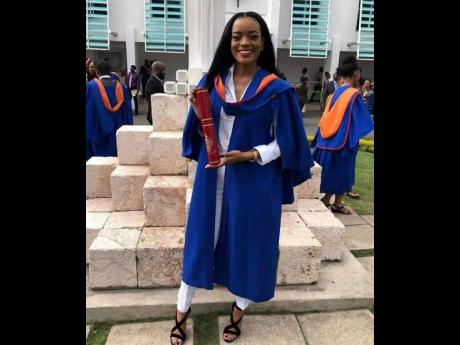 Contributed
Jodian Fearon passed away mere hours after giving birth to a daughter at the Spanish Town Hospital. She graduated from the University of West Indies last November with a marketing degree.

The forensic report into the death of Jodian Fearon, the first-time mother whose passing triggered national outrage, is now complete.

Fearon died on April 24 on the floor of the University Hospital of the West Indies after a series of bureaucratic and procedural hiccups prevented her from being attended to in at least three hospitals.

Her death was later ruled to be heart failure.

The family has been incensed about the near-three-month wait for the report to be in their hands.

But executive director of the Institute of Forensic Science and Legal Medicine, Judith Henry-Mowatt, said that it was not within the institute’s purview to deliver autopsy reports to family members.

“That is the remit of the police, who will have to collect the report,” Henry-Mowatt told The Gleaner on Wednesday.

Fearon died shortly after giving birth at the Spanish Town Hospital, after which she was transferred to the University Hospital of the West Indies.

The autopsy was conducted on April 29 and was overseen by the family’s independent observer, Dr Jephthah Ford.

Fearon’s mother, Portia Haughton, is said to be distraught about the delay in producing the autopsy report.

“I am aware that the formal autopsy report has been completed. However, we are yet to receive a copy. I am extremely disappointed in the process so far as it appears that only status and links get things done in Jamaica,” Haughton said.

“I would like to know what the cause of my daughter’s death was after she was tossed around like a football and died on the cold hospital floor. I need to know why the delay because I would really like some answers.”

Haughton said, via a letter, that she was “in pursuit of justice” for her daughter and hoped that there would be no cover-up.

Further, a spokesperson for the family has also questioned why they are still awaiting word on Fearon’s death.

“At the height of Jodiann’s death and subsequent furore over the circumstances under which she died, the Government came out talking about nothing will be swept under the rug and promising full disclosure. Well, we are still in the dark,” said the representative, who wished not to be named.