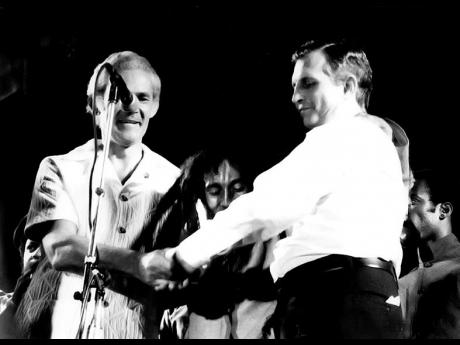 Gleaner Archives
In this iconic Gleaner photograph, reggae star Bob Marley (centre) urges then Prime Minister Michael Manley (left) and then Opposition Leader Edward Seaga to shake hands at the One Love Peace Concert at the National Stadium on April 22 1978. The late ’70s and lead-up to the 1980 general election represented one of the most polarising and bloody periods in modern Jamaican history. 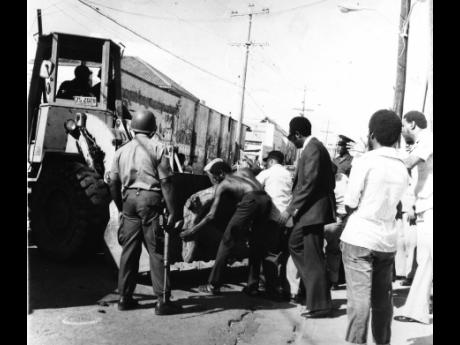 Gleaner Archives
In this November 1980 file photo, then National Security Minister Winston Spaulding (third right) oversees the clearing of a roadblock on Gold Street in Central Kingston in the aftermath of the bloody general elections. 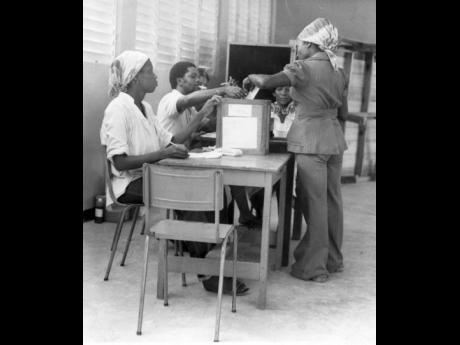 Gleaner Archives
A voter places her ballot in a box during the 1980 general election. 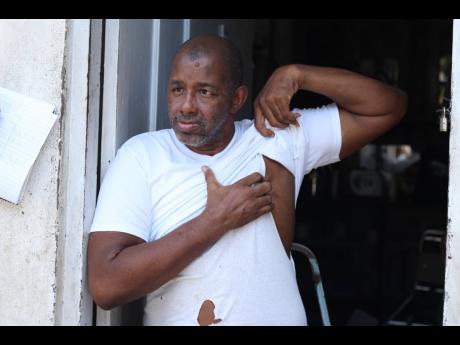 Contributed
Payne Land resident Mark Dozel-Anderson shows the scar from a bullet wound he received in 1980. Although not a politically motivated attack, Dozel-Anderson recalled several tense moments during the bloody election campaign period.
1
2
3
4

Forty years on, Gregory Wilson* can vaguely recall the faces of two bus operators who kidnapped him after he naively boarded their vehicle decked out in a snazzy green shirt and green pants in the run-up to the 1980 general election.

However, flashes of the brazen knife reprisal attack that followed, and of blood oozing from the two operators’ bodies are forever etched in his mind – a ghastly reminder of the island’s bloodiest election campaign period.

The writing was on the wall years before Jamaicans were called to the polls. As political tension and attacks grew, reggae legend Bob Marley tried to steady the waters at the One Love Peace Concert when he called Prime Minister Michael Manley and Opposition Leader Edward Seaga to join him on stage, the three holding hands and lifting them to the heavens in a symbolic show of solidarity.

However, there would be no stopping the bloodbath.

More than 800 people were reportedly killed in politically motivated violence during the campaign between February and October 1980 alone. The period was marked by heavy political tribalism and instability and bogus voting.

This was against a backdrop of proxy rivalries between superpowers the United States and the Soviet Union, which held differing political ideologies, explained Christopher Charles, professor of political and social psychology at The University of the West Indies, Mona.

For many impoverished Jamaicans, the period signalled death and destruction, especially if dons in their political garrisons got a whiff of any deviance to the political order. Retribution was swift and brutal. Many were beaten, several homes firebombed, and in the case of the 1977 Rema Eviction in the Wilton Gardens community, flung from high-rise buildings.

Hundreds of Jamaicans packed their bags and fled the island in terror.

Then there were the murders of 153 mostly destitute, elderly and physically disabled women in a predawn politically motivated arson attack at the Eventide Home on Slipe Road in Kingston, five months before Jamaicans went to the polls.

‘Wrong’ colours could cost your life

Like those victims, Wilson told The Sunday Gleaner that he, too, could have easily been counted among the dead a few weeks after relocating from “country” to Dunkirk in Kingston. Unaware of the magnitude of political tension in the island’s capital, Wilson said he left home to do business in Half-Way Tree on that ill-fated day, decked out in colours associated with the Jamaica Labour Party (JLP).

In Cross Roads, the driver and conductor emptied the bus, but insisted that he alone remain inside. It was only when the driver turned off the regular bus route that his suspicion began to grow.

“I said, ‘This is not the way to downtown’, and that is when the driver start ask me questions. Him ask where I come from and me tell him. Him seh, ‘No, man. Yuh can’t come from Dunkirk and wear them clothes deh’,” said Wilson, explaining how he was later asked to name some ‘top men’ from Dunkirk. He barely succeeded and was flung from the bus on Slipe Pen Road.

“All when I run to go back up to the Cross Roads taxi stand, I don’t done shake yet. I know the man dem was going to kill me,” he said, adding that the news was later relayed to his brother and some gangsters in Dunkirk, who waylaid the bus and ambushed the operators downtown.

“Pure stab dem get. One man went for the ductor and two of them go for the driver. To this day, I don’t even know if dem dead or alive,” he continued, reflectively and seemingly remorseful over the reprisal. “But them times there was not pretty at all. Trust me!”

Despite immense poverty and little clothes on their backs, Jamaicans were better off avoiding red, orange or green outfits. Four-pocket ‘bush jackets’ were also controversial as they were regarded as Manley and People’s National Party (PNP)-aligned clothing.

“The South West St Andrew constituency was under pepper those times because I think most people were just stupid. Unlike now, people never used to look and say, ‘You are Jamaica Labour Party, I’m am PNP, may the best man win’,” said Mark Dozel-Anderson, a resident of Payne Land, a historic PNP stronghold. “Them times, people used to take the darkest street.”

For the past four decades, Dozel-Anderson has been suffering a multiplicity of health complications after he was shot under the arm in the weeks leading up to the general election. The injury stemmed from an altercation between him and a security guard outside a dance venue. The bullet narrowly missed his heart and it is now difficult for him to walk.

“I remember a time you used to hear, ‘Labourite a come!’, and when you look, all pickney underneath the bed. Everybody running. So the youths from pretty early decided that it was better they died trying, so most youths turn to the gun. Most dead, some turned out to be dons,” he said.

“It has changed significantly and I am happy. But now, it is a different thing because now it is the bigger heads (politicians) doing the wrongs,” he posited.

Gleaner headlines from the 1980 election campaign read like the script of a horror movie in the days following the assassination of tough-talking PNP candidate for St Andrew East Rural, Roy McGann, and his bodyguard, Corporal Errol White.

The 1980 slaying was the first and only time a political representative was killed by warring thugs.

The Gleaner chronicled the deadly and terrifying chapter in the country’s political history with October 1980 stories such as ‘Gunmen kill 6 in city, baby and others wounded’, ‘Gunmen kill 55 in 12 days since McGann’s death’, ‘Electoral Office on lookout for imposters’, and ‘Three killed on election day’.

There were also other reports of an arms cache shipped to the Montego Bay Airport, which, according to one retired member of the police’s Mobile Reserve, spawned intense firefights between police and superiorly armed gunmen, some of whom were alleged to have been trained in Cuba as ‘Brigadistas’.

The M16 and the Enforcer MI rifle were reportedly the gunmen’s preferred choice at the time, and political enforcers knew their state adversaries were far less armed.

The retired cop told The Sunday Gleaner that on countless occasions during his tenure, police were pinned down by gunmen in Corporate Area communities such as Rockfort, Mountain View, Tivoli Gardens and Mathews Lane. They had to be rescued by their more heavily armed colleagues of the Mobile Reserve.

“If you survived the ’80s, from late ’79 to ’80, ’81, ’82 as a policeman on the ground, you would have to say that God has you in his hands,” said the retired senior cop, who racked up more than 40 years of service in the force and asked not to be named for the story. “There was an influx of AR-15, some M16 rifles, and some of the men that we were fighting were liked trained people.

“There were warring factions between the JLP and the PNP gunmen, and when they run into an area and start shooting or burning, you, as the police, were always caught in the middle and that makes it even more dangerous,” he said, adding that for gunmen from Wilton Gardens (Rema) and Arnett Gardens (Jungle) in Kingston trading bullets was the order of the day.

Political battle lines were drawn all over the city, he recalled.

“There was a time on Olympic Way – they used to call it the Hip Strip – when you couldn’t cross the road. You on the left can’t go on the right. Those were some of the things we encountered as police,” he said. “As police, when you went into a community like Mountain View and you and them exchanging fire, it was like it was the whole community coming down on you,” said the officer, who lost a nephew in the bloody election period.

That nephew and friends, he said, were attacked by JLP supporters outside a market at the entrance to Majesty Gardens on Spanish Town Road. The friends ran deeper into the community but his nephew, who was new to the area, tried to make it to the nearby Hunts Bay Police Station for safety. He was intercepted by the attackers, who beat and shot him. They then threw tyres around him and set him on fire.