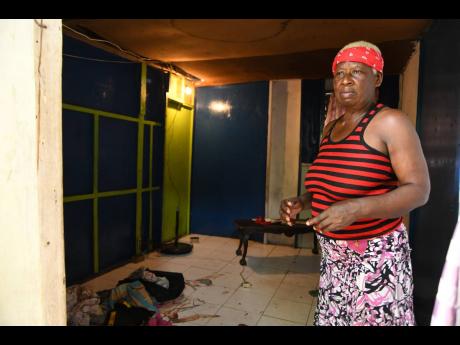 Rudolph Brown/Photographer
Patricia Shaw is a picture of pain as she stands in the room where her daughter, Nichola Pink, was shot dead in Denham Town, Kingston, on Sunday. Two others were slain in the Chestnut Lane gun attack.

Bare-chested and occasionally sipping from a cup with white rum mixed with energy drink, Michael Wilson wore a distressed look in Denham Town, Kingston, on Sunday.

Another man, Godwin Morris, who was in another dwelling in the same yard, reportedly heard the explosions and went outside. He, too, was attacked by gunmen.

Morris was later found lying in a pool of blood, suffering from a gunshot to the back of the head.

Wilson, who helped raise Pink, his sister, since she was a baby, said the gun murder has upended his world. He described Pink as a people person who always sought to give a helping hand.

An unanswered phone call to his sister was the ominous signal that she had been a casualty of the attack.

Detectives assigned to the Kingston Western Police Division have been working overtime because of a flare-up of violence in the troubled region, with at least seven people killed there in just over a week.

The uptick in violence has been linked to gang-related reprisals and the assertion of dominance by a gang known as the Tivoli Young Generation.

The motive behind Sunday’s triple murder is not immediately clear.

Kingston Western has been haunted by gang violence for decades and was placed under a state of emergency on June 14. Those emergency measures lapsed in mid-August.

At the Chestnut Lane house on Sunday, a blood-stained floor and shattered tiles told a tragic tale. Clothes belonging to the couple were thrown on to the pools of blood that had formed in the room.

Pink’s family said they were bewildered about the reasons behind the deadly attack.

With tears welling up, refusing to run down her face, Pink’s mother, Patricia Shaw, was forlorn about losing the youngest of five children. She assayed a stoic face after being warned by her family not to be consumed with grief.

The 67-year-old said that her 11-year-old grandson, now an orphan, has had to receive medical attention and counselling after he began experiencing a fainting spell.

“Everybody tell mi seh mi must keep strong because at my age yah now, wid pressure and sumn. ... She has one child, but he is not here now because every minute him drop dung,” she said.

Shaw, who lives a short distance from her daughter’s home, recalled receiving a phone call in the wee hours of Sunday morning from a friend, telling her to visit the location. She initially refused to visit the death house.

“Mi feel it because it is mi last child,” said Pink’s mother.