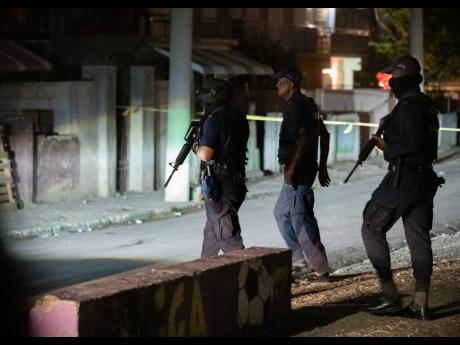 File
Policemen patrol Dumfries Street in west Kingston, hours after an eight-year-old was slain on Wednesday, May 6.

The nightly curfew introduced as a COVID-19 containment measure has catalysed a lull in serious crimes, but there are still criminals lurking in the dark, testing law enforcement officers’ patience, and adding more chaos to the lives of Jamaicans battling the crushing effects of the pandemic.

The heinous crimes range from shoot-outs to stabbings and choppings; some gang-related, others sparked by fits of domestic rage as relatives cram in tightly wound spaces. Sleuths are also hinting at a rash of break-ins – churches a favoured target.

According to Sunday Gleaner checks, at least 709 persons have lost their lives between March 10 and last week.

Among them are four cops, who were all killed in the different evening-to-predawn curfews imposed since Jamaica recorded its first case of the coronavirus.

At the same time, nightly shootings have been reported in almost all major police divisions, particularly those in the Corporate Area, St Catherine South, St James, and Clarendon.

Deputy Superintendent Christopher Brown, the crime chief for the Jamaica Constabulary Force’s Area Three admitted last week that there have been setbacks even though major crimes continue to fall. Yet the police remain relentless in adversity with God at the helm, he affirmed.

Up to late last month, 140 policemen and policewomen had reportedly tested positive for the COVID-19. More than 80 cops had returned to work at that time, while some 300 cops were reportedly in isolation and quarantine. Among the victims was Police Commissioner Antony Anderson.

“While there have been a few notable [criminal] incidents within our area of responsibility, I believe in spite of the storm, God gives us peace. We will continue to pray before we plan, do whatever, and all that is necessary, and at all times, what is right,” said Brown, hinting at solid leadership and a growing partnership with citizens.

Area 3 comprises the parishes of St Elizabeth, Manchester, and Clarendon, and together they have recorded 123 murders, Clarendon leading the charge with 72 homicides – 32 fewer than last year. Contrastingly, on March 14, the parishes had recorded eight, 27, and nine murders, respectively.

In the meantime, nightly gunfire has been reported in sections of the St Andrew South and Kingston East, while residents have been on edge in sections of Portsmouth, Southborough, and Newlands, following shootings in those St Catherine South communities.

Nelva Road in Southborough has been particularly ghostly since two men were shot – one fatally – after hours last month, residents say.

“At the moment, we don’t have any major challenge with regard to crime, but we still have areas that have always been of concern and we keep monitoring those,” a senior officer in St Catherine South, who asked not to be named, told The Sunday Gleaner.

“We have far less shootings than what we used to have. Our murders have been down by 20 per cent compared to last year,” said the cop.

Among some of the heinous killings that have occurred during curfew hours are those of Superintendent Leon Clunis and his charges, Detective Corporal Dane Biggs and Constable Decardo Hylton, all gunned down in a predawn operation in St Catherine.

Other after-dark killings this month were that of an unidentified man in Howell’s Content in Clarendon, and that of Pauline Bingham-Brown, who was stabbed to death in a domestic dispute in St Ann. The incidents occurred between 9 and 10 p.m. on October 4.

Reports are that all three were standing on the roadway and when gunmen opened fire.