ON EDGE - As rains unleash fury, family in danger after backyard plunges over precipice 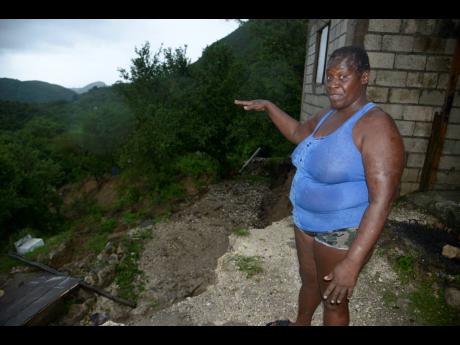 Nicholas Nunes/Photographer
Gaylia Catwell said that she is afraid to sleep in her house after a landslide claimed much of her backyard in Lindo’s Gap, St Andrew, on Sunday. 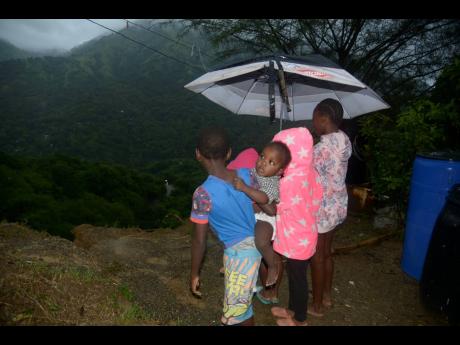 Nicholas Nunes/Photographer
More than 20 children, among a family of almost 60 living in Lindo’s Gap, St Andrew, peer over a precipice after heavy rains swept away their backyard on the weekend. 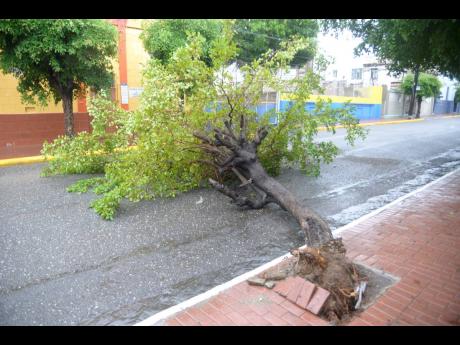 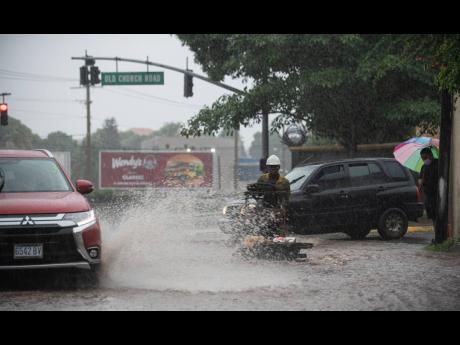 Gladstone Taylor/Multimedia Photo Editor
A handcart operator is splashed by a motorist along upper Waterloo Road in Kingston as heavy rains lashed the island on Sunday. 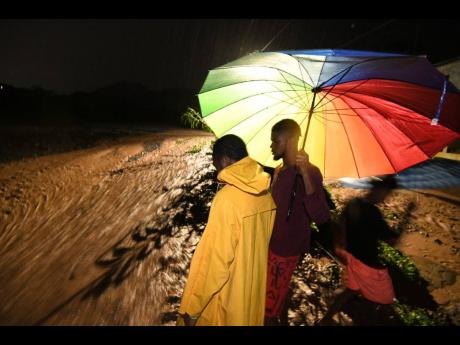 Close to 60 members of one family, including more than 20 children, in Lindo’s Gap in St Andrew East Rural are battling fears that further torrential rains and swirling winds triggered by the outer bands of Tropical Storm Zeta could sweep their homes over a precipice.

Much of the family’s backyard, a haven for frolicsome children and which had ample space to park vehicles three days ago, had plunged into oblivion on Sunday as storm rains scoured Jamaica, flooding homes, toppling trees and utility poles, and leaving multiple motorists marooned.

The sliver of yard the Lindo’s Gap family has left is in danger of falling victim to rapid erosion with the soil saturated with nearly weeklong rains, and threatens the foundations of the place they call home.

Catwell came home just in time on Friday afternoon to ask friends to help remove a motor vehicle before it went over the precipice.

“The car was here, and I saw a crack, and one of the wheels was over the gully. I called my niece same time and seh, ‘Come and move the car’, so people come in and start push di car,” she told The Gleaner.

“Di car could not start same time, so we had to draw it and put it over there. Friday night, everything start sink go down. ... If my house goes, my sister’s house will go, too. Others will go, too. I am afraid to sleep.”

Catwell’s pregnant relative, whose baby is due in three months, is worried that she may soon have no shelter for the unborn child. Catwell is requesting that the authorities quickly build gabion baskets to mitigate against more severe land slippage.

Laurence Walker told The Gleaner that the construction of gabion baskets had commenced but had ceased for reasons unknown to him.

“The soil is soft. If you look down the gully, you will see water, but there is no water coming off from up here. The water has been running under the earth, so it is very soft, and if we get more rain, everything will slide off easily,” said Walker.

Communications manager at the National Works Agency, Stephen Shaw, told The Gleaner on Sunday that a clearer view of the scale of the flood damage would emerge on Monday. He cast doubt, however, that a preliminary estimate of the repair bill could be provided today as assessment teams are expected to fan out across the island to evaluate the scope of the disaster.

Shaw said that damage was reported islandwide but singled out the constituency of St Andrew East Rural – where 15-year-old Saneeka Leechman and her father, Romeo Leechman, 42, perished in a landslide on Friday – as a red zone. Sections of Mavis Bank and Gordon Town were also hit by land slippages, he said.

“We have had damage right across the country,” Shaw added.

Several Clarendon communities were walloped by flooding and landslides on the weekend.

Winston Maragh, mayor of May Pen and councillor for the Rocky Point division, said a collapsed tree had caused severe damage to power lines in a section of Old Monymusk in Alley. He noted, however, that Jamaica Public Service Company (JPS) crews were working to rectify the issue.

Deputy Mayor Clive Mundle, who is also councillor for the Frankfield division, was mortified at the devastation.

“It’s a whole lot of flooding and landslides. North West is prone to these things when it rains, so it’s a disaster ... . It’s terrible,” said Mundle, adding that a fallen tree had damaged a house in Corn Hill on Sunday.

“There have been a lot of landslides and roadblocks. Nobody can move in or out.”

Fredrick Blackstock, councillor caretaker for the Ritchies division in Clarendon North West, told The Gleaner that several roads had been rendered impassable.

He said residents of the farming communities of Sunbury, Glenwood Spring, Broomwell, and Cumberland were lamenting the loss of crops.

“While the teams are doing their best to address the situation, efforts are being hampered by impassable roadways, as well as ongoing rains, which make working with electricity dangerous. Teams are, however, doing their best,” a statement from JPS read.

The National Water Commission also reported that its facilities had been badly impacted, causing high turbidity levels, blocked intakes, or dislocation of pipelines.

Some facilities in St Mary, St Catherine, Manchester, and Westmoreland were out of operation because of high turbidity on Sunday. The affected sites include White River, Salisbury, Sue River, Two Meetings, Moravia, and Bulstrode.