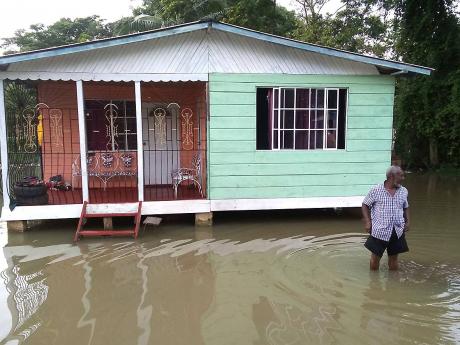 Photo by Hopeton Bucknor
Gladstone Wollery, a resident of Three Miles River in Westmoreland, up to his knees in floodwaters that covered several yards in the community on Sunday.

Flood rains wreaked havoc on swathes of western Jamaica on the weekend, resulting in millions of dollars in damage and untold woe for residents who lament being years-long victims of the nightmarish weather.

St James, Hanover, and Westmoreland were worst affected, with dozens of farmers, homeowners, and businesses hit hard by floodwaters and squally weather that destroyed crops.

Farmers in St James communities such as Adelphi, Garlands, Hampton, and Springfield reported suffering devastation, while elsewhere, in Cascade and Sandy Bay in Hanover, residents were mostly affected by flooding.

George Hanson told The Gleaner that more than half-acre of his banana farm in south St James was destroyed by a freak storm that hit the west late Saturday afternoon.

Over in Westmoreland, dozens of residents in Georges Plain and Three Miles River were marooned after their homes were flooded out. Anchored on the verandahs, families in Three Miles River looked on in despair on Sunday as their yards were submerged after torrential rain blanketed the parish.

Gladston Wollery, Sophia Spence, Roy Cope, Neil Taylor, and O'Neil McGregor were among the residents badly affected by the floodwaters.

The entire roadway leading to Dorris Lane in the community was impassable, and yards were transformed into fishing ponds after the Three Miles River overflowed its banks.

"Is like wi live inna one waterbed, an' every time it rain, the river overflow and flood out wi yard an' wi house dem," Cope told The Gleaner.

He said that residents had, over the years, lost livestock and furniture to floodwaters.

Complaints to their member of parliament, as well as the Westmoreland Municipal Corporation, have fallen on deaf ears, they said.