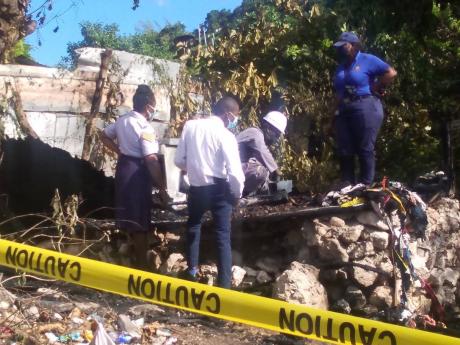 Photo by Hopeton Bucknor
Police and fire investigators sift through the charred rubble after a five-year-old boy was burnt to death in a one-bedroom board house in Flankers, St James, yesterday.

Tragedy struck in Flankers, St James, yesterday morning when fire claimed the life of a five-year-old boy as it destroyed a one-room board house in the New Road section of the community.

The dead child has been identified as DeAndre ‘Jaydon’ Peterkin, a student of the Providence Basic School.

Yesterday afternoon, a large crowd gathered near the burnt-out structure as residents looked on in shock and disbelief as firefighters from the St James Fire Brigade Investigation Unit and detectives from the Coral Gardens Police Station combed through the rubble.

According to reports, at about 11:30 a.m., the child’s mother left him in the company of his grandmother, who lives next door, and went on an errand.

“Jaydon was wid mi inna di house and mi believe seh him go over him mother house fi get snacks, and next thing mi hear him a bawl out and a call fi help, and when mi run outside de whole house deh pon fire,” said the trembling grandmother.

“When mi hear Jaydon a shout out fi help, me try fi go inna de house fi get him out, but di flames was too hot, so me affi call fi help,” continued the grandmother. “Neighbours come and a help me, but all we try we couldn’t get him out, so him just burn to death.”

The grandmother said that earlier in the morning, she was not feeling well, so she sent the child’s mother on an errand downtown Montego Bay to collect some medicine from another of her daughters.

Superintendent Rudolph Seaton, head of the St James Fire Department, told The Gleaner that the brigade received the call at about 12:43 p.m, and one unit from the Ironshore Fire Station was dispatched to the location.

“When the firemen got to the location, they saw a one-apartment constructed of ply board and zinc roofing fully engulfed. After carrying out cooling-down operations, the firemen were told that a child was probably inside,” said Seaton. “A search of the rubble led to the discovery of the child’s charred remains.”

Senator Charles Sinclair, councillor for the Flankers division, said he was badly shaken by the incident.

“I got the call about 1:30 p.m. I have a five-year-old child and when I heard the news, it caused me to reflect deeply,” Sinclair said. “I have spoken to the parent and the grandmother, who are all traumatised. The community on a whole is traumatised.”

Sinclair said efforts will be made to assist the family, including getting them counselling.