Gov't to press ahead with five-year housing rollout 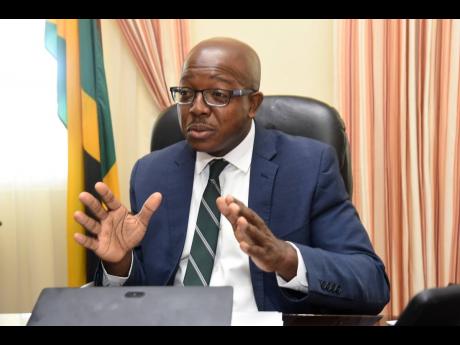 Kenyon Hemans/Photographer
Minister of Housing, Urban Renewal, Environment and Climate Change Pearnel Charles Jr speaking of some of his plans as a new minister.

Despite projections that Jamaica’s economy is set to decline by up to 10 per cent for the current fiscal year owing to the COVID-19 pandemic, the Andrew Holness administration has no immediate plans to adjust its target of rolling out 70,000 affordable housing starts over the next five years.

Minister of Housing, Urban Renewal, Environment and Climate Change Pearnel Charles Jr said that while the projection for housing starts was ambitious, he would not suggest that the prime minister change the target.

“What we have to do is to acknowledge that we have several impending and current challenges that arise from the pandemic and the damage from the recent rains. Those things should urge us to action faster,” Charles told The Gleaner in a recent interview.

“We are trying to maintain the ambitious targets within the realities that we face,” he added.

The minister signalled that it would take another year before he could determine whether the administration’s initial target will be met.

The primary responsibility of his ministry, said Charles, was to craft policies and programmes to allow the National Housing Trust (NHT) and other agencies, as well as the private sector, to be able to fulfil the development agenda.

Charles said his ministry was in the process of advancing “very quickly our housing policy”, which includes a strategy to incentivise and encourage development.

He said the housing policy would also speak to the question of rental, noting that many young people were not in a position to acquire a home at this time.

“A lot of young people can’t buy, but they have to rent, so our ultimate goal is provision of safe, legal and affordable housing solutions for all Jamaicans,” Charles acknowledged.

The Government is also pursuing plans to amend the Rent Restriction Act, which was last amended about 37 years ago. Charles said his ministry has organised and held several sessions and workshops with various stakeholders to discuss proposed changes to the legislation.

The housing minister said there are several issues affecting persons who rent their houses. Citing the vexed issue of recovery of possession, Charles said that some landlords have become frustrated in their attempts to recover properties.

The proposed amendment to the law would now place the matter in the hands of a tribunal, which would ease the pressure on the court system.

In addition to its housing starts target, the Holness administration had committed that the NHT would spend $1 billion towards social housing annually, to include construction and repairs.

The 2019 draft national housing policy says Jamaica’s squatter population now stands at about 20 per cent of that of the country.

According to the draft policy, the objectives relating to squatting will be achieved through a combination of increased affordable housing supply to limit further squatting, physical and legal improvements to squatted areas through urban upgrading projects, and by programmes of early detection to suppress their expansion.