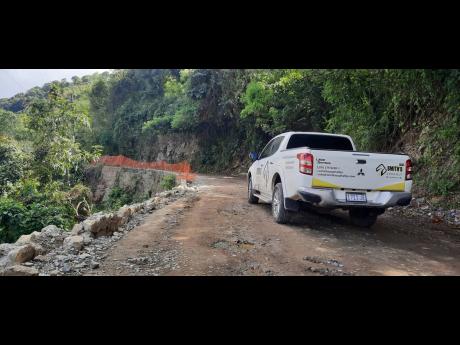 Photo by Corey Robinson
A section of the road being upgraded in Trinityville, St Thomas. 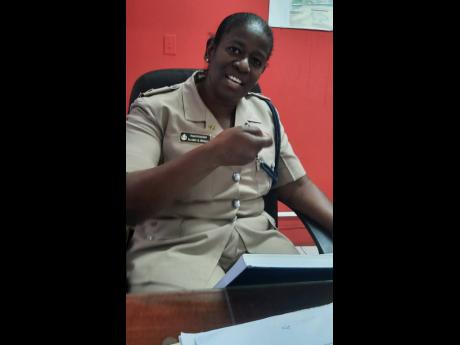 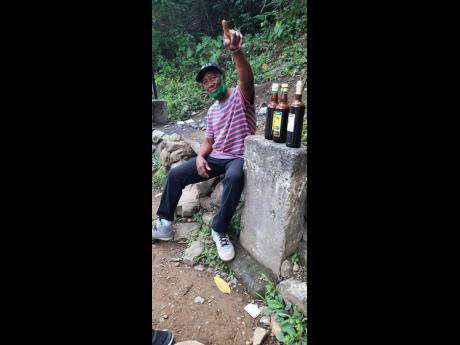 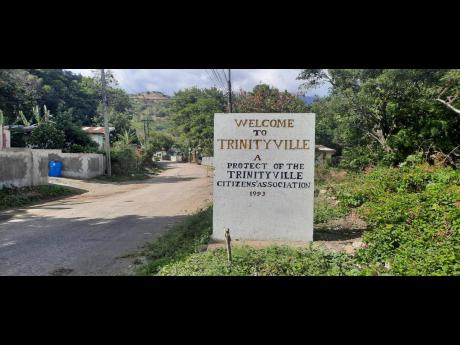 Photo by Corey Robinson
The entrance to the community of Trinityville in St Thomas.
1
2
3
4

A nefarious letter demanding bounty or blood from construction site operators in St Thomas has been turned over to the Counter-Terrorism and Organised Crime Unit (C-TOC) for deeper analysis, but for many residents of the sleepy Trinityville community, the damage has already been done.

Trinityville is not the typical community for this type of crime. The area recorded one stabbing murder all of last year – that of a man whose attacker ran to the police station after committing the act.

Here, gun-toting and masked intimidation are as foreign as piped water, Internet access and proper roads.

So when two gunmen held up an excavator driver two weeks ago and stuffed a page-long demand of $100,000 fortnightly – “corporation or slataration” – into his palm, it brought work to a grinding halt and disappointment, fear and anxiety settled over the community.

Trinityville, however, is one of few communities hit by a long-standing criminal strategy that has for years crippled development and cost massive loss of lives in some of Jamaica’s poorest communities.

From larger government and private projects such as Highway 2000, improvement on the Mandela Highway, Portia Simpson Miller Square, work on the Old Harbour bypass, and construction projects at The University of the West Indies, Gleaner stories over the last decade have chronicled the bloody trail left behind by criminals who prey on construction sites, bringing death to resistance.

Contractors at apartment complexes, The White Water Housing Project, and Unions Estate in St Catherine were also favoured targets over the years, and homeowners – like some in Portmore, St Catherine – are not spared by hoodlums making demands as they make additions to their dwellings.

Some projects, like cleaning work in the South and North Gully in Montego Bay, St James, come seasonally, and have attracted set perpetrators over the years. Gully clearing in sections of Bull Bay, Riverton and Seaview Gardens in the Corporate Area have also been targets, according to the contractors.

Demands are often made via text messages, sometimes by voice notes, while more brazen criminals deliver their deadly requests in person.

Whatever the mode, the grim reality has led many contractors to apply for licensed firearms or personal security guards – the latter a recommendation to the Trinityville site operators by Superintendent Allison Byfield, head of the St Thomas Police Division.

While police presence has been increased in the area, Byfield confessed that like many other divisions islandwide, St Thomas simply does not have the resources or manpower to provide stationary policing at that and other construction sites in the parish.

Communities in Spanish Town, St Catherine; Clarendon; St James; and the Corporate Area are among those deemed hotspots for extortion, but contractors who spoke to The Sunday Gleaner last week declined to reveal exact worksites for fear of identification and victimisation.

“What they try to do is to pressure the smaller contractors and subcontractors, and sometimes it comes down to how individual contractors choose to deal with it,” posited Lenworth Kelly, president of the Incorporated Masterbuilders Association of Jamaica (IMAJ), which represents contractors islandwide.

“Extortion is part of a wider social problem. It comes out of need. Most times, incidents like that one with the letter is just from some little men trying a thing to see if it will work, but we have to stand our ground,” charged Kelly. “It is something that you have to take to the law. Don’t bother to tell me not to get the police involved.”

Kelly has been part of the construction industry for many years and said he has been approached by extortionists on many projects. On all occasions, he said that he rebuffed their demands and reported the threats to the police. With police intervention, he said, the criminals normally back off.

“The thing is that there is no room in contracts for anybody to pay extortion, and when you pay extortion, you are basically giving the extortionists money out of your (contractor) pocket; and you are not sure on any job that you are even going to make any profit,” he charged.

The alternative, he explained, is to offer employment for residents, forging partnerships – as per an anti-corruption plan devised by the IMAJ and the National Works Agency (NWA) in 2003 that also recommended a reduction of political influence in work allocation. But political tribalism, Kelly said, continues to stymie access to work on some sites and pits neighbourhood gangsters against each other.

“In some areas, it is really about the bigger dons controlling the site. So you will have gangs warring against each other over who should be collecting extortion money on the site,” said one contractor.

Last Friday, Stephen Shaw could not put a price on the estimated cost of extortion on NWA-commissioned sites across the island.

“It is one of those things that happens, but very few persons will come up and say that this is the situation,” he explained, adding that outside of Trinityville, he is unaware of any other NWA site under threat from attackers.

“I don’t know if that (extortion) is something that can be factored into any project. When you are doing projects, you don’t really take into consideration that kind of business. You look at material cost, you look at other factors. Not extortion,” he continued.

During his address at the official launch of the Southern Coastal Highway Improvement Project in August 2019, Prime Minister Andrew Holness issued a stern warning to extortionists, who have plagued other roadworks across the island.

“Whenever we have these major infrastructure projects, people see them as opportunity ... . Not necessarily opportunity for the people, but as opportunity for themselves. Works delayed, works done, subquality, substandard, extortion, overruns ... . [It] is not going to happen here. Let me be very blunt: the Government will not stand by and allow this national project to be in any way captured by thugs, criminals, and dons,” he said.

“This project is not for fattening your pockets. This project is to help the people of St Thomas come out of a hundred years of neglect. This project will be put under the highest level of scrutiny because we know the stories and we are tired of it,” Holness added.

In 2014, four men were murdered as they transported a large sum of money for salaries from a site operated by the China Harbour Engineering Company (CHEC). That incident is believed to have been linked to extortion, and prompted a high-level investigation and operation that led to the recovery of a portion of $2 million.

In response to queries regarding the pervasiveness of extortion on its current sites, and measures to address them, CHEC’s Communication Manager Kemisha Anderson offered: “We are aware that extortion is an issue for some businesses here in Jamaica. As a contractor, we are grateful to have the assistance of the local agencies that contract us to liaise with the authorities to have the issues resolved whenever they arise.”

As far as Trinityville is concerned, however, investigators say they are left flat-footed without a suspect with whom to match the handwriting in the letter.

Byfield is confident, however, that with the deep disappointment of members of the community, a suspect will soon hit police dragnets.

“There are persons here from the Intelligence Unit. There are persons here from C-TOC, who are also in the area. Yet, we just can’t narrow down to a group or one or two persons. But it doesn’t fit the profile of persons in the Trinityville space. But residents are very disappointed about this and I’m confident they will work with the police,” the St Thomas Police Division commander said.

“The fact is we really needed the road,” moaned Lenford Ford, pastor at the Faithful Gospel Church of God in the community. “We have been suffering for so long and now we are getting the road and these things start to come up.”

“I don’t think who did it come from ‘bout here because everybody who knows the road wouldn’t want extortion from this. Besides, it is really we that these things are affecting,” added resident ‘Tisha’, referencing the dirt-track Trinityville main road, which, after 20 years, is finally receiving attention, thanks to the Southern Coastal Highway Improvement Project.