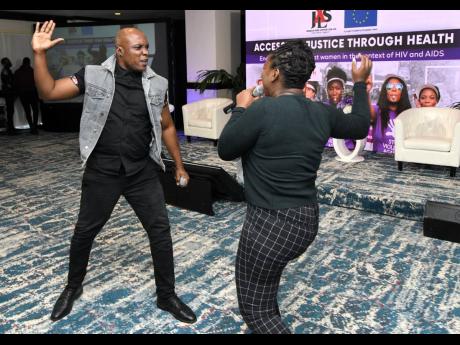 Rudolph Brown/Photographer
Ashe Company members depict a scene focusing on violence against women at the Jamaica AIDS Support for Life and European Union symposium at The Jamaica Pegasus in New Kingston on Monday, International Women’s Day.

Peta-Gay Milne, a blind woman, was abused for four years by someone who also had a disability.

She was among a four-member panel of women who shared their experiences with gender-based violence during a Women’s Day symposium themed ‘Unmasking Violence against Women within the context HIV and AIDS’.

Milne had a son whose father was unsupportive and so she turned to another male for financial support.

A former massage therapy student at the HEART training centre, she was often accused by her new partner of “going to look a man”.

She was restricted in many ways at home and could not speak on her phone at certain hours.

“I was choked, he stepped in my belly, and when I went to the police station to report my abuse, the police looked at me and said to me, ‘Yuh a idiot? How yuh fi blind and have somebody a abuse yuh?” she recounted.

After that encounter, she was hesitant about making reports in the future.

“I went back to the abuse and the community never helped. They were like, ‘A him a mind har. Him fi do weh him fi do wid har,’” Milne explained, adding that the family of her abuser had a history of violence.

On another occasion, she called the police to the home while she was being choked.

Milne recalled that she was collared by the police, who accused her of making a false claim, on the basis that he knew the character of the abuser.

The abuser was never charged even when Milne turned up to the police station bleeding.

Milne is urging women, particularly those living with disabilities, to speak with a trusted person who can help them to break free.

“A good friend helped me out of my abuse. Thank God for her,” she said.

“When I reached out to Tameka, she said enough is enough, and her place wasn’t big, but she took me in and my son was living in the country at the time, so he never saw most of the abuse,” she said.

Legal support officer at the Jamaica AIDS Support for Life, Jade Williams, said that under the legal services programme, she has had 72 clients, 52 of whom are women who experienced violence.

Sixty-one per cent of the matters were related to domestic violence, with 36 per cent of victims suffering sexual violence and rape.

“We also have economic violence, which was experienced by 21 per cent of clients. This is the withholding of financial support in order to coerce the woman to perform in ways that she would rather not,” Williams said.

Of the 52 women, 30 per cent had never made a report before. Another 30 per cent made police reports but the majority had no follow-ups.

Twelve per cent of the women made reports, but they were not recorded by the police even in cases where they presented with physical evidence of abuse.

Georgia Green’s introduction to Eve for Life, an NGO that empowers survivors of sexual violence, at 15 years old when she was a teen mom, prepared her to identify and respond to the abuse she experienced years later.

She endured psychological abuse, which turned physical in October 2019, at the hands of the father of her second child.

“He used words that he knew would make me feel down, like ‘Yuh too intelligent fi a behave suh dunce or fi a behave suh fool’, like for relationship purposes,” she recalled.

The situation exacerbated when she began working from home during the COVID-19 pandemic.

Green would be in meetings when he returned from work and he would attack her with questions – “Yuh couldn’t tek up di clothes dem off a di line?”

When she reminded him that she was still at work, he cursed her and this took a toll on her emotionally.

She was in a state of depression but was intent on making her escape in March 2020.

To women, she said: “Not because a man isn’t hitting you means that it is not abuse. The minute that person makes you feel less of a woman or a human being, seek counselling.

“Don’t wait until it reaches the stage of physical abuse,” Green added.