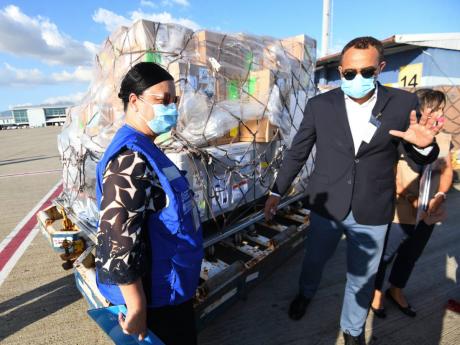 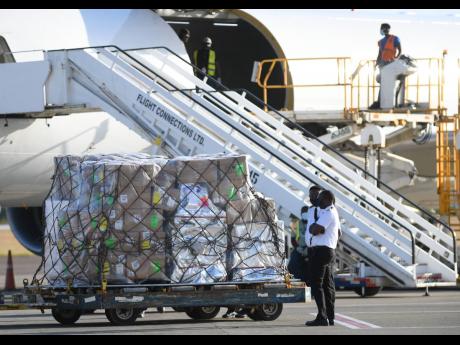 Ricardo Makyn/Chief Photo Editor
Two pilots stand next to the shipment of vaccines shortly after they were offloaded at the Norman Manley International Airport yesterday.
1
2

As the Government ramps up its efforts to secure COVID-19 vaccines amid a tight market as developed countries hoard jabs, National Health Fund (NHF) Chairman Howard Mitchell has disclosed that one supplier has expressed that it can allocate two...

As the Government ramps up its efforts to secure COVID-19 vaccines amid a tight market as developed countries hoard jabs, National Health Fund (NHF) Chairman Howard Mitchell has disclosed that one supplier has expressed that it can allocate two million doses to the island even as he pointed to logistical challenges in getting secured supplies.

The revelation comes as the island yesterday became the first Caribbean country to receive a shipment under the COVAX Facility, with 14,400 doses landing at the Norman Manley International Airport.

But Mitchell has pointed out that a promise of allocation from the vaccine manufacturer, who he said he could not named because of a non-disclosure agreement, was not a guarantee of delivery.

“Allocation is not a contract. It is simply saying that they will put us in the production line, in the order that our request was received,” reasoned the chairman of the NHF, which has responsibility for procuring and storing vaccines in Jamaica.

“We have been promised contract documents in very short order. When we sign that contract, we will be told of the dates when we can access the vaccines,” Mitchell said.

“There is a tremendous gap between supply and demand,” he stressed as he told The Gleaner that Jamaica has approached all the manufacturers whose vaccines have been approved by the World Health Organization (WHO), as well as those who are in line awaiting approval, indicating its interest in making purchases, with a number of them responding.

Citing Bloomberg reports, Mitchell said that 9.6 billion doses of COVID-19 vaccines have been ordered by 137 countries and multinational companies, but up to last week, less than two billion doses had been produced.

He said that Jamaica can expect to continue receiving vaccines in small shipments until late April.

The AstraZeneca doses which arrived yesterday will complement the 50,000 which were gifted to the island by India last Monday.

Minister of Health and Wellness Dr Christopher Tufton said that this week, infirmary residents, along with their caregivers, and parliamentarians over 60 years old will begin to receive their first dose of the vaccine.

As of Sunday, 12,099 Jamaicans were vaccinated, representing 71 per cent of the target for the first week of vaccination after a kick-off last Wednesday.

Tufton again lamented the inequitable access to COVID-19 vaccines, a problem highlighted by the WHO as richer countries hoard vaccines, ordering excess supplies and shutting out many developing countries from accessing the highly in-demand jabs.

Europe has an adult population of 375 million, but it has ordered 1.6 billion doses.

In the United Kingdom, 219 million doses have been ordered for an adult population of 55 million people.

Canada has inked deals for 188 million doses, although it has approximately 32 million people.

Tufton pleaded with Jamaicans to understand that not all variables were under the control of the Government.

“We were expecting 149,000 to 250,000 doses within the month of February. I went to Parliament and I said that. I had to eat my words, not because of me or the Government, but because today, March 15, we are just getting our first shipment, which we are very happy for,” the health minister said.

Mitchell pointed out that securing the vaccines represented only one stage of the challenge as the logistics of delivery are “difficult for a number of reasons”, with a primary one being that vaccines are largely made in India, the United States and the United Kingdom.

“We have to pick them up and bring them. In some cases, they have to go to where we can pick them up. There is a lot of uncertainty in the logistics of it. In addition to that, there are global issues with cargo, both shipping and with aviation. It’s a complex situation,” he said.

Jamaica’s share of the vaccine allocated for CARICOM under the Africa Medical Supplies Platform is 238,000 doses and is expected in mid to late April.

In mid-February, Jamaica requested an increased allocation of 1.95 million doses from the African Platform, which has been approved.

The NHF chairman said there are concerns about price volatility as there have been indications of a price increase.

PAHO/WHO representative to Jamaica Dr Bernadette Theodore-Gandi said yesterday’s vaccine shipment was a “hopeful step” in the fight against COVID-19.

“According to the first round of COVAX allocations, Jamaica is expected to continue receiving doses through May until it reaches 124,800 doses,” said Theodore-Gandi.

She reiterated that the goal of COVAX is to provide vaccines for at least 20 per cent of the population of each participating country.

Theodore-Gandi admitted that there have been delays, but noted that COVAX has allowed developing countries to receive vaccines within three months after developed countries.

“PAHO is doing its part to have countries secure and deliver vaccines safely and as quickly as possible, but manufacturing limitations, low supply and high demand make this an uncertain situation,” she remarked.