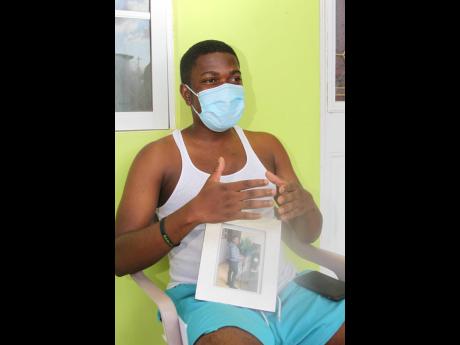 Nathaniel Stewart/Photographer
Twenty-four-year-old Damownie Johnson, only child of W/Sgt Tameicha Powell, speaking of fun times with his mom, who passed away suddenly on the weekend. 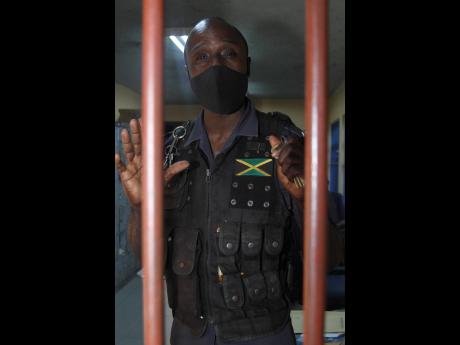 Nathaniel Stewart/Photographer
Constable Nathony Hamilton of Dentention and Courts said he respects the dedication W/Sgt Tameicha Powell approached her job and that she would be truly missed.
1
2

Damownie Johnson, the 24-year-old son of the late Woman Sgt Tameicha Powell of the Clarendon Division, is ruing a missed chance to tell her he loved her for a final time as the cop passed away while being transported to hospital for emergency medical attention in the wee hours of Saturday morning.

The tragic chain of events unfolded very quickly, Johnson said, blaming poor road conditions which slowed his trip to the hospital as he drove from their Milk River Home to the May Pen Hospital.

Reflecting on her death, Johnson that said he suspected his mother knew something wasn’t quite right before she retired to bed on Friday night, but was trying to spare him any concern.

“She knew something was wrong, but she did not tell me cause she knows the type of person I am. If she had told me, I would have brought her to the doctor right away,” Johnson, Powell’s only child, said.

Johnson said that after Powell went to bed, she made an alarm about 3:30 Saturday morning and he rushed her to the hospital. She never made it.

He told The Gleaner that prior to that incident, she went to the hospital to check out a swollen leg and was told they would be admitting her, but she refused. The doctors did some bloodworks as she had sickle cell anaemia.

He suspects that his mother was reluctant to be admitted because of “the whole COVID thing”.

“She didn’t want to tell me cause she didn’t want me to fret,” Johnson said, revealing her cause of death as sickle cell and pulmonary embolism.

Recalling fond memories of his mom, Johnson said that they had many fun times together and did everything as a unit.

Every summer, he said they would always spend her birthday at a different hotel or go on a boat ride. They played lots of games, ludo, cricket, football, volleyball.

Johnson said Powell, who has given more that 20 years of service in the police force, was also involved in the community, coaching the girls of the Rest netball team.

“She walked with them, laugh, giving them knowledge about the sport,” he shared.

Constable Nathany Hamilton told The Gleaner that he was still stumped by his colleague’s sudden death.

Describing Powell as one who always has a smile and someone you can talk to about anything, he recalled his last conversation with her last week Thursday, when they rapped about work-related issues and life in general.

“She was encouraging me and I was encouraging her. We had a good laugh about the situation that I mentioned to her and at the end of the conversation, I was pleased with what she said to me,” he shared, adding that she will be sadly missed.

“When I got the news of her passing, I was really troubled. Even now, it is sad. I’m still in shock up to this moment. I don’t even know what happen but you know God knows best and I want to say to the family, ‘Be strong’.”