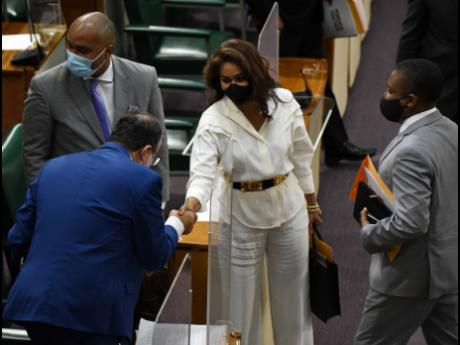 Ian Allen/Photographer
Leader of the Opposition Mark Golding is congratulated by colleague Member of Parliament Lisa Hanna after Golding made his Budget Debate presentation on Tuesday. Flanking them are opposition MPs Julian Robinson and Phillip Paulwell.

Opposition Leader Mark Golding said the Students’ Loan Bureau (SLB) guarantor system should be abolished as it is undermining the path to prosperity for children from low-income households.

Finance Minister Dr Nigel Clarke, in opening the Budget Debate last week, had said that come April, the requirement could be revised to allow for the use of one guarantor for a loan.

But Golding said the Government has not gone far enough and proposed that there be none at all.

The opposition leader stated when the books of the SLB were examined at the Public Accounts Committee of Parliament, the amounts recovered from guarantors were minuscule.

Golding stated that it suggested that the requirement for guarantor was not necessary for the sustainability of the bureau.

“We know that many potential student loan applicants from low-income homes cannot find a suitable guarantor. The requirement of finding a guarantor works against children from low-income families,” Golding contended.

“If you think about people who are from poor communities where they are oftentimes not many people who are able to do something like this or would have already been a guarantor for some, it is difficult for them to find somebody else,” Nelson argued.

The State, and not students, he said, should bear the risk of employment creation in the country.

“The financing of tertiary education needs to be transformed, especially for young people who just don’t have it,” Golding declared in Parliament.

“If you don’t have guarantors, then it means if people don’t pay back, you can’t recover. So, it increases the risk,” Chung argued.

But Christina Williams, former president of the University of the West Indies Guild of Students, said she would welcome any proposal that could make access to the funds easier.

“I commend the principle of Mark Golding just as how I commended the policy revision of the Government in giving one guarantor,” she told The Gleaner.

Golding said a PNP administration would reconfigure the loan structure to cap repayment to a “reasonable” percentage of the actual income of the borrower.

On that issue, Williams said that Golding’s proposal presented cause for concern.

“Can the monthly fees of current graduates really act as adequate security for these loans? Students are making, on average, between $65,000 and $100,000 per month with the numerous other debts to reconcile,” she questioned.