Billion-dollar gains profiteering off the backs of poor, says Golding 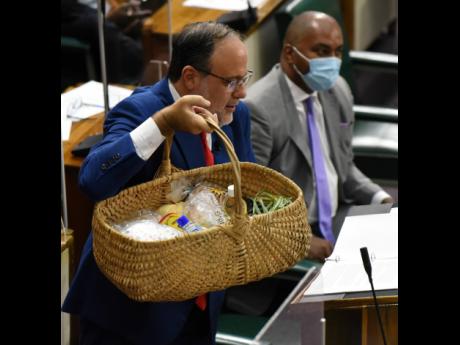 Ian Allen/Photographer
Opposition Leader Mark Golding displays what he says is a basket of food depleted by rising prices. He was making his maiden Budget Debate presentation as opposition leader. 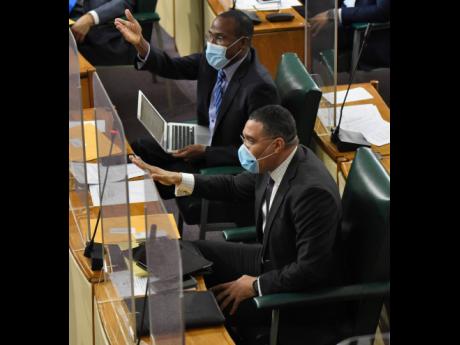 Picking apart one of the central highlights of Finance Minister Dr Nigel Clarke’s Budget presentation, Opposition Leader Mark Golding cast a Bank of Jamaica (BOJ) dividend of $33 billion as the fruit of an effective tax that has oppressed the poor.

The $33 billion is expected to be paid over to the Government in the first week of April and will be used to help fund the $60-billion Social and Economic Recovery and Vaccine Programme for Jamaica.

Golding, in his maiden presentation in that position, said more than half, or $17.9 billion, of the dividend, came from foreign-exchange trading and from net gains on the BOJ’s holdings of foreign-currency assets.

“So, in essence, the Bank of Jamaica has profited from the volatility and devaluation of the Jamaican currency over the three years. This is the same devaluation which has made life harder for the Jamaican people,” Golding argued in his Budget presentation on Tuesday.

He said the devaluation effectively operates as tax on the purchasing power of the Jamaican people.

“This devaluation disproportionately hurts low-income people. In using the $17.9 billion of foreign exchange gains from the Bank of Jamaica to fund its Budget, the Government is essentially treating the devaluation as a form of tax,” Golding asserted.

“It is a regressive indirect form of taxation paid in particular by less-well-off Jamaicans,” he added.

Golding said basic food items have increased substantially over the period, in large part because of devaluation.

“The minister has boasted that this is the result of good policy; that would suggest it was a deliberate strategy. It has further impoverished Jamaicans who can least afford it and that is the bitterest form of non-prosperity anyone can imagine,” the opposition leader declared.

As he unpacked a basket in Parliament, Golding stated that $10,000 that was given to the unemployed under the COVID Allocation of Resources for Employees programme was unable to purchase sufficient food for survival.

But the government members ambushed Golding on what they hinted was a long list of food items.

“But a nuff that man! Keep going …,” one of the government members of parliament shouted across the aisle, as Golding appeared startled at the thunderous pounding of benches opposite him.

But in a quick counter, Clarke stated that the Jamaican dollar depreciated against the greenback by an average of nine per cent year over year between January 2012 and February 2016, but there was no BOJ dividend.

“By comparison, the average annual depreciation of the Jamaican dollar against the United States dollar over the given year period March 2016 to March 2021 has been 3.8 per cent despite being in the worst economic crisis in history.

“If Mr Golding’s logic is correct, where was the BOJ dividend then?” Clarke said in response to a Gleaner social media post on Tuesday.