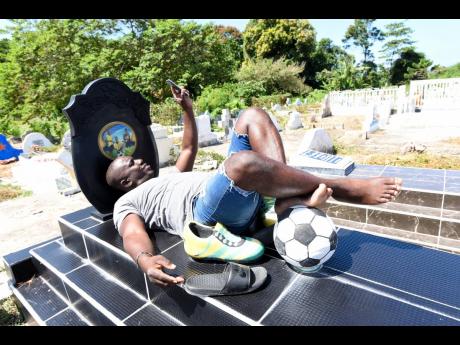 Owen Dixon was a picture of grief as he lay on the grave of his late nephew taking selfies against the backdrop of emblazoned photos of the soccer star on the headstone on February 26. Dixon last saw Rushawn Duncan alive in the Cayman Islands in...

Owen Dixon was a picture of grief as he lay on the grave of his late nephew taking selfies against the backdrop of emblazoned photos of the soccer star on the headstone on February 26.

Dixon last saw Rushawn Duncan alive in the Cayman Islands in 2017, where the young football prodigy had gone on duty in preparation for the CONCACAF Under-15 Boys’ Championship.

Rushawn, who attended Steer Town High School in St Ann at the time of his death, had told his mother that he wanted to become a star like Argentinian Lionel Messi.

But that dream was shattered when the 15-year-old succumbed to stab wounds in the Crooked River community of St Mary on August 31, 2017.

The accused, Shemar Malcolm, was 17 years old at the time of the incident.

Dixon, who was overseas when his nephew was killed, said he had been informed that the stabbing tragedy may have been the case of a prank gone awry. But his greatest grievance is that the case has taken more than three years to get off the ground.

“Mi nuh feel like no justice a come out of it. The case a drag out too long,” he told The Gleaner.

Malcolm is reportedly on bail.

He was granted bail then and had not been seen by the Dixon family since the fatal stabbing until they spotted him at court late February.

Patrice Dixon has been having sleepless nights since the killing of her son, but she hopes that the case, which is scheduled to be heard in court today, March 25, will be the first major step on the long road to justice.

“Me know say mi son gone and him can’t come back. Mi believe him fi pay the penalty, even fi get life, which me know, to them, that nah go work,” she said of her only child.

Rushawn’s relatives have also slammed the family of the accused for not reaching out to them because the boys were friends.

“It come in like a my son kill fi dem don. ... Dem nuh look pon me, dem nuh talk to me, none of dem. Dem go station, dem say dem fraid, can’t sleep, all kind of something,” Patrice Dixon said, adding that her family was only seeking justice.