Jephthah Ford, hailed as friend of the poor, dies 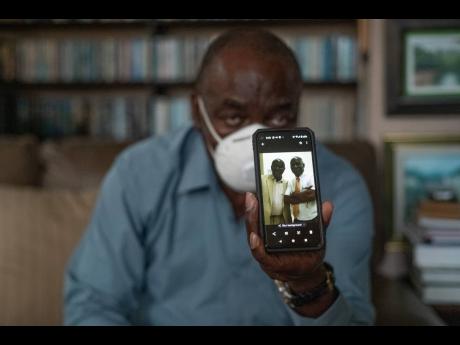 Gladstone Taylor/Multimedia Photo Editor
Dr Japheth Ford shows a recent photo of him and his twin brother, Jephthah, during an interview on Sunday. Jephthah Ford died suddenly after a brief illness. He was 69.

The 69-year-old’s latest cause celebre was getting the truth in post-mortems, sparring with doctors and pathologists in no-holds-barred confrontations.

Dr Japheth Ford did not always approve of the cases his twin brother got involved in, but he has a theory as to why he took them on head-on.

“You notice that his controversial issues always involve poor people. Any problems Dr Jephthah Ford got into was as a result of poor people. He felt that the poor, outside of politics, needed somebody to take care of them,” Japheth told The Gleaner on Sunday.

Jephthah Ford famously pronounced that Jodiann Fearon, a 23-year-old mother died “on the floor” of the University Hospital of the West Indies after giving birth at the Spanish Town Hospital in a tragic fiasco in April 2020.

“Jodian died a terrible death,” he told The Gleaner after observing the post-mortem.

Ford, that same year, also stoked controversy after declaring that “government doctors don’t want to work with me because I talk the truth at post-mortems. I will not join the conspiracy. I will write exactly what I see,” he said.

This after the autopsy of Javane Duhaney, who was allegedly shot and killed by a Jamaica Defence Force soldier, had been delayed because Ford felt there was a deliberate attempt to shut him out of the process.

Ford died after a brief illness.

Japheth told The Gleaner that his brother had been sick for a couple of days, but things took a turn for the worse after he had breakfast on Sunday.

“He complained of a headache and feeling a bit out of sorts. He started complaining of weakness. I could not record his blood pressure, and he started sweating. I called an ambulance and, unfortunately, he died with the ambulance at the door,” Japheth recalled.

“He died in the arms of his two daughters and myself and some friends,” he added, speculating that he died of a stroke related to elevated blood pressure.

The late doctor had celebrated his birthday four days ago.

Japheth said that his brother advocated strongly for COVID-19 care, especially for the poor.

“He published a pamphlet and distributed it in the inner city, enlightening people about the effect of the eucalyptus oil and menthol to fight COVID-19,” Japheth stated.

Ford was said to be pro-mask and championed social distancing as a way to limit the spread of the coronavirus.

“His biggest disappointment was that he thought that free education and free healthcare were not free enough. And he campaigned bitterly for an improvement in the standard of health,care that was given to the poor,” Japheth told The Gleaner.

Ford contested the 1989, 1993, and 1997 general elections for the People’s National Party in St Andrew North Western.

He was defeated by Derrick Smith of the Jamaica Labour Party on all occasions.

The PNP, in a statement on Sunday, lauded Ford for his fight for social justice.

“He was also a community physician par excellence. His calling went beyond a distinguished medical field, and he achieved an uncommon convergence of professionalism, advocacy, and public service,” the party stated.

Minister of Culture, Gender, Entertainment and Sport Olivia Grange said she was saddened by his passing.

“We have lost a Jamaican who truly cared about our people and their well-being,” Grange said in a statement.

In 2017, Grange had appeared as a character witness for Ford at his sentence hearing following his conviction on corruption charges. She had pleaded that he be spared jail time. He was convicted and sentenced to six months in prison.

The decision was appealed.