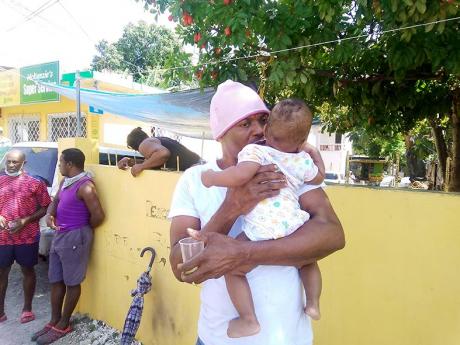 Photo by Hopeton Bucknor
Steve Sinclair kisses his granddaughter moments after she was rescued from a fire in Flankers. 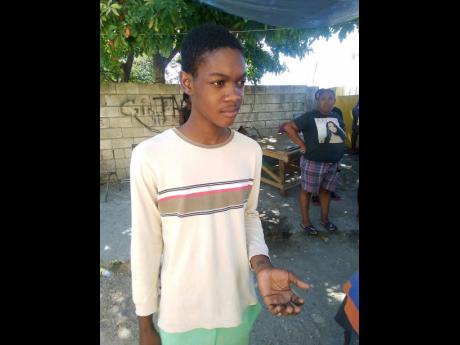 Photo by Hopeton Bucknor
Melike Marston, the brave teenage boy who was among the first to enter the blazing building. 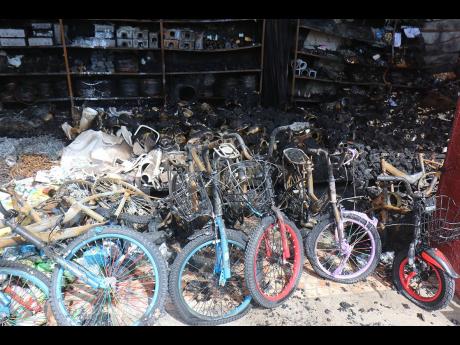 Ashley Anguin/Photographer
These bicycles were among the property destroyed at Consumers Real Choice Hardware in Flankers, Montego Bay, on Sunday.
1
2
3

Tennyson Bernard may have lost an estimated $25 million in property when fire razed his hardware store in Flankers, Montego Bay, on Sunday, but his real treasure, his seven-month-old daughter, was saved in a dramatic rescue that unfolded on Sunday afternoon.

“I am just happy that my seven-months-old daughter was saved from being burnt alive,” said Bernard, who was not at the site when the fire started.

The police reported that flames were reportedly seen coming from a section of the Consumer’s Real Choice Hardware about 12:45 p.m., and the fire department was summoned.

But by that time, all the firefighters could perform was cooling-down operations as the building was gutted in the blaze.

Bernard’s common-law partner, Kedisha Sinclair, and their child, who reside on the upper floor of the building, got trapped in the fire and were later rescued by relatives and other residents.

Steve Sinclair, father of Bernard’s partner, was relieved that he was able to reach the location in time to save his daughter and granddaughter.

Mr Sinclair had received a frantic call from his daughter that the property was engulfed in flames.

“The people dem help mi, and mi just climb up over another part of the building and manage fi tek the baby tru a window. Then she search fi di key and manage fi come out same time,” he said.

Mr Sinclair, who resides at another section of Flankers, said that neither his daughter nor his granddaughter was seriously hurt. He said that Ms Sinclair was too shaken up by the ordeal to speak to the media.

Taise Weatherly told The Gleaner that she and her younger brother, Melike Marston, played a vital role in rescuing the young mother and child from the inferno. Another resident, Darlon Williams, was also critical to the life-saving effort.

“My brother even ended up getting burnt in his hand middle while we were trying to find a way inside the compound,” said Weatherly, who criticised the police for not being helpful in the rescue.

Assistant superintendent at the St James Fire Department, Keneisha Vaccianna, said that the Ironshire station got the call approximately 1:02 p.m. Three units, including two from Freeport, responded to the blaze.

The cause of the fire has not been determined.