‘We have lost a big part of the family’ 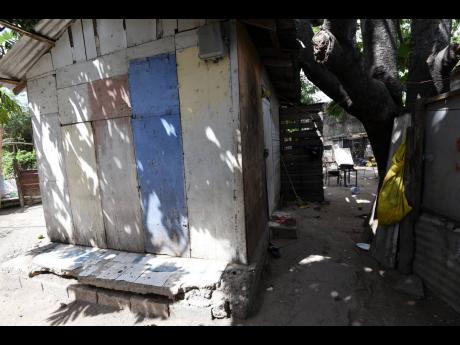 Ian Allen/Photographer
Bloodstains tell part of the tale of the tragic events which unfolded on the step of a board house in Gregory Park, Portmore, St Catherine, where police officer Jermaine Bennett fell after he was shot and killed by gunmen on Tuesday. 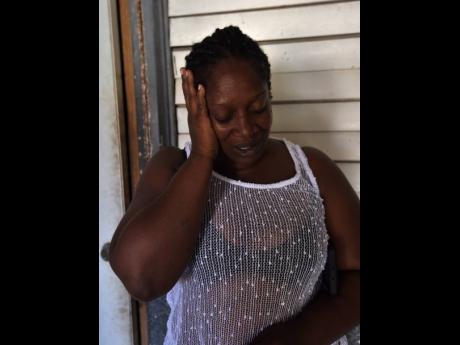 Thirty-five-year-old cop Jermaine Bennett left out on Tuesday morning to visit a young lady nearby to enquire about a five-week-old baby girl over whom he had reservations about whether he was the father.

He would not return home as about 9:45 p.m., as he exited the young woman’s house in Gregory Park, St Catherine, he was shot dead.

Bennett, who was attached to the Kingston Central Police Division, was shot multiple times by the gunmen, who escaped on foot.

His murder has plunged a family into mourning as they seek to find answers to many questions to comprehend the homicide.

The grief stretched beyond Jamaica’s shores to the heart of England, where some of his family members currently reside.

Bennett’s mother and sisters living in London were devastated by the news of his demise. They told The Gleaner that they could hardly find the words to express their feelings, noting that Bennett was a kind and responsible family man.

“I am not feeling good, but I have to be strong for my mom. The news is devastating because Jermaine is a very humble person, who, in my opinion, is too humble to be a police officer,” Nicole Lawrence said of her brother.

“He is the main breadwinner for the family there in Jamaica, his father not being in good health. It is so hard for us with the pandemic and the travel situation, we don’t know if we will get a chance to travel. We are taking it very hard,” Lawrence stated.

She said that while the family was aware of the dangers that police officers in Jamaica face, it was heartbreaking that Bennett’s life ended this way.

“We have lost a big part of the family. There are no words to express how we will miss him,” said Lawrence.

His younger sister, Simone Lawrence, who had the last conversation with Bennett before he left the Dahlia Avenue residence in Gregory Park for the visit that culminated in the tragic encounter, said that her brother was the nicest person one could find.

According to her, Bennett had cooked dinner for his two sons, ages six and 11, before leaving out for what was to be a short visit.

“Him leave out to go visit a young lady to find out if the child was his and never come back. ... Him just go to identify the child and in the house for a little while. It look like him a come out of the house when dem shoot him,” she speculated.

“Him a police officer. We know one day something might happen on duty, but not this way. How they do him is just shocking to us,” she said.

Simone said her bother was a quiet and loving person who cared deeply for his sons and nieces and nephews, who have been tearing up at the news.

“He was supposed to take the boys to spend the holiday weekend with me and my children, but this won’t happen now,” she said in a sorrowful tone.

Younger brother Giovannie Bennett revealed that the last time he saw his brother that evening was 20 minutes before he left the house.

“The last thing we spoke about was some bills that he had plans to clear up on Wednesday. After this, he went upstairs and finished cooking for his sons,” he said, adding that his brother wanted to see if there was any resemblance between him and the child.

“We grew up together in the same house. My brother wanted to be a police officer from the get-go, so I know he was fulfilling his passion,” said Giovannie.

Bennett’s brother-in-law, Robert Thelwell, who spoke on behalf of the deceased’s sister, Monique Thelwell, who fainted on hearing the news and was overcome with grief when The Gleaner visited her home, described Bennett, who served in the police force for eight years, as a nice man who just went from work to home and took care of his boys.

“I don’t know of any problem between him and anyone out there for this to happen. This news hit us hard. My biggest regret is that he did not have his firearm to defend himself,” Thelwell said, adding that the family would be well served if the killers were caught and brought to justice.

On Wednesday, the Police High Command expressed condolences to the family, noting that the Chaplaincy Unit would be offering support to Bennett’s family and colleagues.

“We want to remind our members that the threat level against police remains at extreme, and as such, officers are encouraged to take swift and decisive action to defend themselves, colleagues and their families,” the High Command said in a release. “These attacks are a testament to the fact members of the constabulary are not insulated from the effects of crime and violence.”