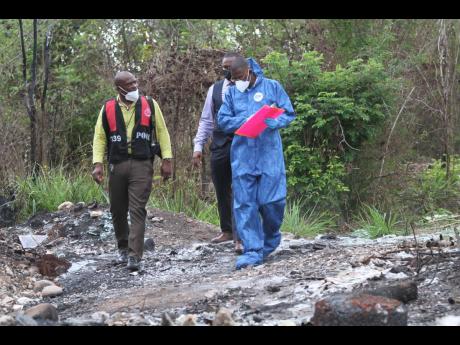 Nathaniel Stewart/Photographer
The pathologist and detectives from the Clarendon Police Divison process the scene where the remains of an unidentified female, believed to be missing teacher Nattalie Dawkins, were found in the bushes in Sandy Bay, Clarendon, on Thursday. 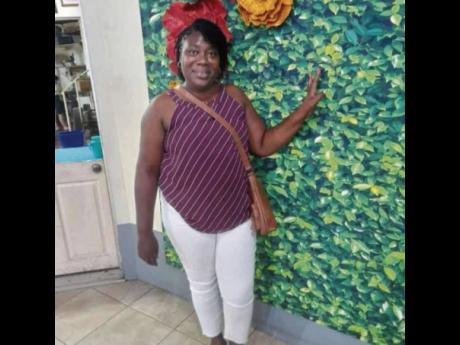 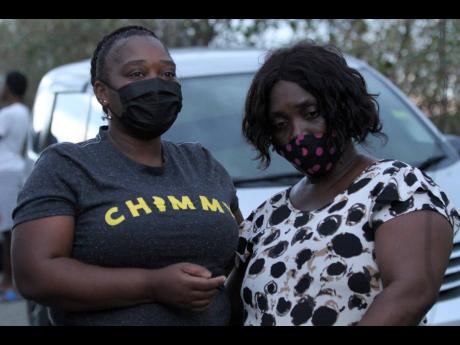 Nathaniel Stewart/Photographer
Teachers, friends and batchmates of Nattalie Dawkins at teachers’ college, Shedia Smith (left) and Ann-Marie Robb, look on as the remains of an unidentified female, believed to be Dawkins’, were found in Sandy Bay, Clarendon, on Thursday, April 8. 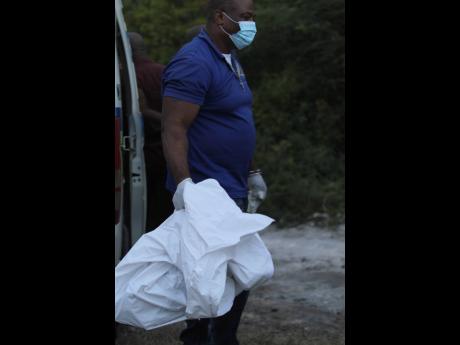 Nathaniel Stewart/Photographer
A morgue employee removes the skeletal remains found in a shallow grave on Thursday from the site.
1
2
3
4

The country remains on tenterhooks awaiting confirmation of whether a body of an unidentified female found in Sandy Bay, Clarendon, on Thursday is that of missing 44-year-old teacher Nattalie Dawkins.

The gruesome discovery yesterday brought a nine-day search for the educator to what could be a tragic end when a joint police-military team assisted by volunteers discovered the skeletal remains in a shallow grave.

Dawkins was reportedly last seen at home about 11:30 a.m. on March 30. Her car and other items from her house were also missing.

The car was recovered last weekend in an operation in Bellfield district, St Catherine, in which 20-year-old Jeff Bedward was killed in a shoot-out with the police. A .38 revolver and three .38 cartridges were also recovered.

Deputy Commissioner of Police Fitz Bailey said investigations revealed that Bedward was at Dawkins’ residence around the time she disappeared.

“We are convinced, based on our investigation that Jeffrey Bedward, who was fatally shot by the police, was at Miss Dawkins’ residence within the same period she went missing, and we are also confident that he was in the area where the skeletal remains were discovered,” said Bailey.

Bailey disclosed that the investigation is spanning many spheres, adding that Dawkins’ work as a part-time bailiff is also being analysed for clues into the motive surrounding her death.

Teachers and relatives, supported by security personnel, have been combing several communities across Clarendon to locate the 44-year-old primary school teacher since her disappearance.

Dawkins’ family members declined to speak with the media on Thursday after the discovery of the body, but earlier this week, her brother, Garfield Campbell, told The Gleaner that they had been struggling to cope with the lingering questions surrounding her whereabouts.

Reacting to news of the possible discovery of Dawkins’ body, Jamaica Teachers’ Association President Jasford Gabriel said it was one of the saddest days in the over 50-year history of the teachers’ union.

“We were hoping and praying as a nation, and especially across the teaching profession, that by some miraculous means, Nattalie would have been found alive [and be] able to reunite with her family and friends and colleagues, and more than all, to be able to continue the tremendous work she had be doing over 20 years,” he said.

He said that Dawkins’ apparent murder was a stark reminder of a breakdown in morality and disregard for life in society.

“When we can begin to turn on our teachers in a manner like this, we know that we need divine intervention,” he said.

Dawkins was from Denbigh Kraal in Clarendon and taught at the Four Paths Primary and Junior High School for more than two decades.

Clarendon South Western Member of Parliament Lothan Cousins told The Gleaner that he was saddened by the latest development, a tragic end to the life of the teacher who contributed positively to the constituency and wider parish.

“Miss Dawkins’ passing is a reminder to us all that we are living in challenging times and are not only confronted by the COVID-19 pandemic, but the crime pandemic,” Cousins said. “While we try to tackle the COVID-19 pandemic, we cannot relent in achieving the Vision 2030 goals of making Jamaica a place where we can live, work, raise families, and do business.”

He added that the increase in violence against women was alarming and called on the Government to implement tougher penalties for criminals.

“I am also calling on the Ministry of Education to deploy whatever resources are at its disposal to the Four Paths Primary School to assist immediately with grief counselling for the teachers and ancillary staff and to extend these services to the children with whom Miss Dawkins would have interacted,” he added.

Three men, including the brother of the deceased suspect, are in police custody in connection with Dawkins’ disappearance and possible murder.

Since the start of the year, Clarendon has recorded 27 murders, eight fewer than it did for the corresponding period January 1 to April 8, 2020.

Nationally, there has been a five per cent year-on-year increase in homicides, with 390 persons murdered since the star of the year, compared to 371 for the corresponding period in 2020.