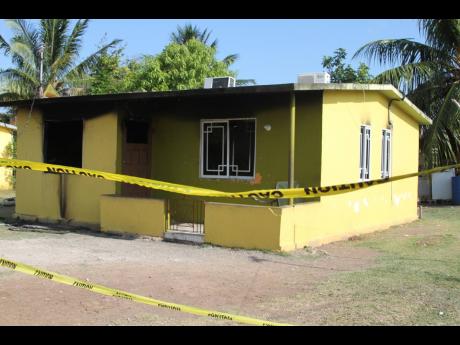 Nathaniel Stewart/Photographer
This house on Hibiscus Way in the Lionel Town Housing Scheme was firebombed on Monday morning, causing residents to become fearful. A car and house were shot up Tuesday morning on Young Street, which persons believe was a reprisal.

Tensions are high again in sections of southeastern Clarendon following the firebombing of a house on Hibiscus Way in Lionel Town early Monday morning.

Reports are that the occupants of the house were awakened by explosions around 3:30 a.m. and escaped the fire through a window.

Residents in the area were tight-lipped on Wednesday, citing fear of reprisals.

“Mi traumatise. Mi never see anything ‘cause mi inside, but mi hear everything. Mi never experience nutten like this,” a resident told The Gleaner.

The latest firebombing incident has reignited anxiety and harked back to the arson attacks on four houses in the community in February, triggering a 48-hour curfew.

Residents theorise that Monday’s attack was linked to the February firebombings.

It is also alleged that a reprisal attack stemming from the Hibiscus Way firebombing jolted a family on Tuesday morning on Young Street, also in Lionel Town. Reports are that around 4 a.m., their house was pockmarked during a gun attack. No one was hurt.

A bullet-riddled car told the tale of the terrifying near-tragedy that unfolded on Tuesday. Several bullet holes to a front door and wall were also observed.

Clarendon South Eastern Member of Parliament Pearnel Charles Jr, who called for increased police presence in the area in February, told The Gleaner that he has once again sought the intervention of the security forces.

Charles said that he met with Dr Horace Chang, the minister of national security, on Wednesday morning to discuss a comprehensive response to crime in Lionel Town. He said Chang has indicated that the area is a priority concern.

The MP stressed that there is a need to “address the root causes and to advance the social intervention activities with urgency,” stating that effective policing alone would not combat crime.