Kids gear up for external exams 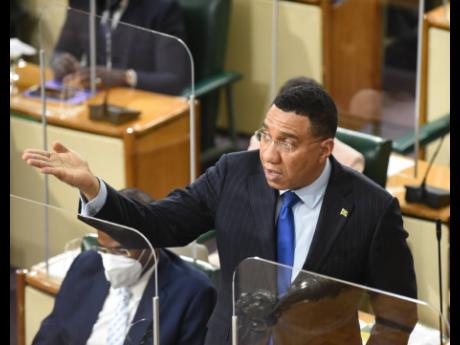 Kenyon Hemans/Photographer
Prime Minister Andrew Holness gestures during his address to lawmakers in the House of Representatives on Tuesday.

Students poised to sit a range of exit and external examinations are set to return to school for face-to-face engagement, Prime Minister Andrew Holness has announced.

“We will have to send our children back to school,” Holness stated in the House of Representatives on Tuesday as he told lawmakers of amendments to orders under the Disaster Risk Management Act.

Face-to-face will resume as of May 10 for students sitting exit and external exams in more than 350 schools.

The prime minister underscored that only a subset of the cohort in each school would be permitted to attend in person.

Holness said students would be issued a schedule for in-person interfacing.

“The COVID-19 infection prevention and control protocols will be firmly established and enforced in the school and we are expecting that there will be strict adherence to these rules,” Holness asserted.

He said provisions have been made through regional education offices for the disbursement of grants for equipment and material needed for sanitisation.

Approximately 39,000 students are registered to do the PEP ability test for grade six scheduled for May 26.

Those exams will run from June 14 to July 16, but oral and practical components will begin June 1.

“You can see that we will have a significant population of our youth moving about in the population,” Holness observed.

He said the authorities know there is a possibly that the coronavirus cases may increase as a result of the relaxation to allow for face-to-face classes.

But, according to the prime minister, the current cohort would have lost a year of in-person instruction.

Holness revealed, too, that based on a school-based assessment readiness survey conducted on April 8, only 16 per cent of CSEC schools and 26 per cent of CAPE schools have more than 70 per cent of coursework completed.

Usually, by March, the SBAs would have been upwards of 90 per cent complete.

“We are in a dire position,” Holness lamented.

An extension of the deadline for SBAs was granted by the Caribbean Examinations Council, and so students should now submit them by June 30 without penalty.

“It was agreed that it could be submitted on a rolling basis. That means that as you [have] completed a part of it or the whole of it, you can submit. So that way, they don’t have a pileup of SBAs to mark ... ,” Holness said.

Project-type SBAs must be submitted by June 18.

The prime minister said he met with some students and their parents for Read Across Jamaica Day and felt an overwhelming feeling of happiness to be outside of their homes.

“They really want to go back to school ... . I just see it on their faces,” Holness told Parliament.

Holness said the administration was keen on the resumption of full face-to-face classes.

“The only way this is going to happen is if we get our population vaccinated,” Holness stressed.

Meanwhile, Holness has announced the extension of several COVID containment measures, begging Jamaicans to bear with the Government as it seeks to keep a lid on infections and hospitalisations.

The 14-day quarantine requirement remains in effect for travellers to Jamaica. However, Trinidad and India have been added to the list from which travel is banned. The United Kingdom has been removed from the ‘banned’ list.

Weekday curfew hours will remain from 8 p.m. to 5 a.m.

Weekend curfew hours will be modified for the next four weekends starting at 6 p.m. on Saturdays and at 2 p.m. on Sundays. Both weekend curfews end at 5 a.m. the following day.