‘My ticket out of prison’

Vaccinated seniors get second shot at return to normality 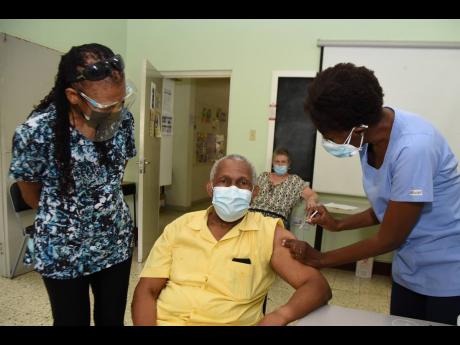 Kenyon Hemans/Photographer
Professor Howard Spencer is vaccinated with his second dose of the Oxford-AstraZeneca vaccine by Dr Kayon Donaldson Davis at the Mona Ageing and Wellness Centre on Wednesday while his wife, Beverley Spencer, looks on. He was among the first set of persons to be vaccinated in Jamaica. 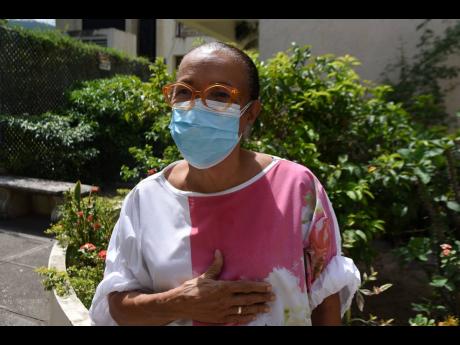 Kenyon Hemans/Photographer
Beverly Rousseau White has been fully vaccinated and is urging others to get their shot. 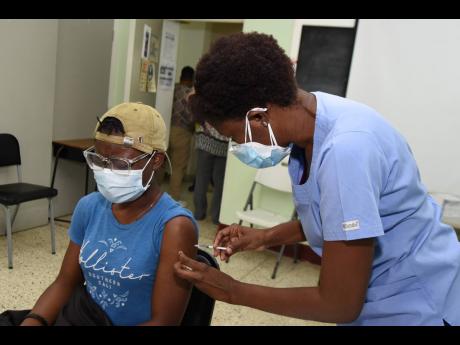 Kenyon Hemans/Photographer
Jamaican female rugby player Dae-Marie Whyte is vaccinated by Dr Kayon Donaldson Davis at the Mona Ageing and Wellness Centre on Wednesday. She is among a group of 80 athletes scheduled to receive their first dose of the Oxford-AstraZeneca vaccine for eligibility to represent Jamaica at the Tokyo Games.
1
2
3

Howard Spencer and his wife of 26 years, Beverley, just want to hold their newborn granddaughter. The usual bonding and snuggling in the first few weeks of life have been replaced by photos and videos. Though COVID-19 has robbed the grandparents...

Howard Spencer and his wife of 26 years, Beverley, just want to hold their newborn granddaughter.

The usual bonding and snuggling in the first few weeks of life have been replaced by photos and videos.

Though COVID-19 has robbed the grandparents of many experiences like birthday celebrations, the special moment of meeting their grandchild for the first time has been an agonising wait.

The couple, who decided against physical interaction with the now four-month-old, were exuberant about getting their second shot of the COVID-19 vaccine on Wednesday.

“I refused to hold her until I got the second shot of the vaccine because I’m sure if it will in any way affect her if I had not gotten my second dose,” said Howard, professor emeritus of cardiothoracic surgery.

The Centers for Disease Control and Prevention considers an individual fully vaccinated against COVID-19 14 days after the second dose.

“We are excited about a new granddaughter in the family, and we can’t wait to be united with her and the rest of the family. We have been isolated from the family for nearly a year, so getting the second dose is really important for us,” Beverley said.

Professor Spencer, 77, experienced no side effects after the first dose while his wife had a mild headache and numbness in the arm that lasted for a day.

The Spencers, who have four children and four grandchildren, watched from a distance the stages of their daughter’s pregnancy by Zoom, which was quite the opposite of previous pregnancies in the family.

The two are looking forward to safely visiting with their friends and to the day when wearing a mask will no longer be mandatory.

“We miss hugging our friends, children, and grandchildren and that we haven’t done since last March. It feels like such a long time that we haven’t had a hug or given a hug,” the 72-year-old wife said.

Professor Spencer lost a couple of colleagues to COVID-19. Those tragedies gave him greater reason to encourage those with whom he comes in contact to take the vaccine.

“This feels like my ticket out of prison. I will still wear my mask and follow the protocols, but it is one step closer to herd immunity,” Beverley chimed in.

Seventy-six-year-old Beverly Rousseau was “relieved and happy” to receive her second dose of the COVID-19 vaccine.

She told The Gleaner that she experienced no side effects following the administration of the first dose.

“More than anything else, I miss the interaction with friends. I have been separated from my family, but I’ve been able to communicate and be in contact because we all follow the guidelines that we have been asked to follow,” Rousseau said.

Meanwhile, Dr Denise Eldemire-Shearer, professor of public health and ageing, said 130 people were being targeted for vaccination on Wednesday at the Mona Ageing and Wellness Centre, which she oversees.

“I’m heartened by the number of people still coming out for their first shots. Word seems to have gotten out that vaccination has resumed,” she said.

Eldemire-Shearer revealed that a number of senior citizens have younger relatives who are anti-vaxxers.

“We’ve actually had some people book appointments and cancel them, saying the young persons are telling them not to come. I would urge young people to remember that the older folks, if they get the virus, are going to get sicker and that we need to ensure that they are guaranteed a longer life,” she said.

Among the group of people receiving their first dose of the vaccine were 400-metre athlete Candice McLeod and rugby player Dae-Marie Whyte.

McLeod found the vaccination experience pleasant and is looking forward to participating in her first Olympics.

“We have been training for so long, worse in a pandemic. This is the best thing we can do for ourselves now,” she said of the vaccine.

The quartermiler told The Gleaner that she had to be mentally strong and make an extra effort to show up for training.

She added that with the COVID-19 uncertainties, it was as if there was nothing to look forward to, but she is excited to take part in the 2020 Tokyo Olympics.

Whyte, a member of the Lady Croc rugby team, said her team members are scattered across Jamaica and some are overseas.

“We’ve been training by ourselves and doing everything we can to stay fit,” Whyte disclosed.

She is hopeful that they will qualify at the Repechage tournament, which will be held in France in July, to make it to the Olympics.