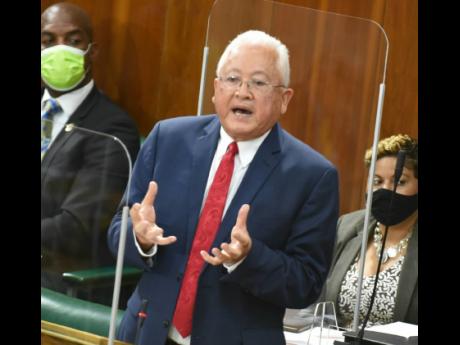 Justice Minister Delroy Chuck has nudged judges to issue longer prison terms to convicts, as a strong signal to the country amid howls from certain groups over perceived light sentences being handed down from the Bench.

In making his contribution to the Sectoral Debate on Tuesday, Chuck said the executive branch of Government was looking to the judiciary to telegraph to criminals that violence had severe consequences.

“This can be achieved by timely trials, strong pronouncements from the Bench, and, in appropriate cases, harsh sentences that send a powerful message,” the justice minister told lawmakers.

“When sentences are lenient or out of established sentences range, the public is also alarmed at the inadequacy of the sentence,” Chuck added.

Chuck said that he responded to this concern by tabling legislation that would give prosecutors powers to appeal the sentences and certain judgments.

Some parliamentarians had been recently up in arms over perceived light sentences for offenders who pleaded guilty.

Guilty pleas offering scope for concessions of up to 50 per cent of maximum sentences were deemed unjust to victims, but detractors counterclaim that that system eases court backlogs.

Chuck added his voice to that debate on Tuesday.

“Where the crime, be it murder or other serious offences, is so gross, so gruesome, whether or not the offender pleads guilty, the court should send a solitary message, the strongest message possible, that that individual, when he is sent to jail, won’t see outside again,” Chuck declared.

Chief Justice Bryan Sykes has dismissed the criticism of sentencing, arguing that judges have to take into account the facts before them as well as the offence for which an individual has been charged.

Sykes pointed out that, at the parish court level, there are limits to the sentences that can be imposed.

Meanwhile, the justice minister said there is now a 90 per cent clear-up rate in the parish and gun courts.

Chuck said the Gun Court was on track to be up to date with all cases by December.

He said that fewer than 10 per cent of active cases in the civil division of the parish court will be in the backlog.